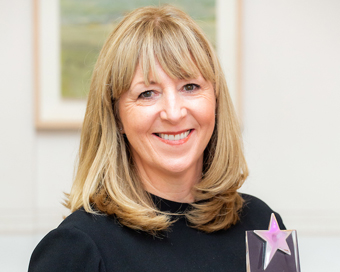 As soon as I had finished interviewing Christine Barrett, I pulled up the YouTube video of Taylor Swift singing Shake It Off.

I didn’t know the song, but, since Christine, who is Microsoft’s Digital Sales Director and oversees a UK market worth hundreds of millions of euro, had mentioned it during our conversation, I decided to check it out. And yes, the lyrics resonated with me:

The song’s message, added Christine, the Boots WMB Empowering Women Award winner for 2018, is an inspirational one for anyone with a fear of failure. Fear of failure, she believes, is at the root of Impostor Syndrome (which is the fear that you will be “found out”). And men, she believes, are better at dusting this fear off more quickly than women. “Our CFO, Amy Hood, sometimes talks about her favourite song, Shake It Off, by Taylor Swift,” Christine explained. “It’s all about moving on and shaking things off, about learning, and not getting stuck in something. Just shake it off and move on.”

“I think there are still a lot of people afraid of failing ­– a lot of that is about fear of not being successful.” “We need to embrace failure. In Microsoft we say, when you fail, fail fast, learn and move on.  “The true learnings are when you have failed, either in your personal or in your work life, so learn from you failure, and look at what you  might do differently next time,” said the Kildare native.

Although she oversees digital sales for the UK, Christine is based in Microsoft’s Dublin office – operating out of the capital, but also using resources based in the UK. She’s been with Microsoft for about 20 years, 15 of which were spent in the company’s Operations department, three as head of Customer Support for Microsoft EMEA, and the final two in the Digital Sales. But she didn’t start out in life as a techie.  After studying French, German and international marketing at DCU, she spent several years working in Paris and Germany in sales and marketing before returning to Ireland in 1997 and taking up her first job with the IT Multinational.

“In all of my roles, what has motivated me is challenge,” she explained. “I love a challenge, and all of the jobs I took with Microsoft involved either a challenge such as troubleshooting in some form or else initiating a new project: “For me a challenge is about being able to address something, be it process improvement, team development or driving for excellence. These are the things that motivate me.”

Another thing that motivates Christine is diversity of inclusion, something very close to the heart of the Microsoft ethos. “The company is very focused on diversity of inclusion across all departments – whether it’s gender, sexual orientation, cultural or generational diversity, for example.” Equality is important to Christine, who revealed that some of her experiences as a young businesswoman highlighted the necessity of a level playing pitch for all: “Early on in my career, when I was working abroad, I came up against significant chauvinism. “Having had experience of this myself has made me very aware of the need for gender and cultural diversity and inclusion of all kinds in the workforce.

“Microsoft has a huge focus on this,” she said, adding that there is also a very pragmatic reason for the multinational’s emphasis on diversity and inclusion in the workplace: “Our mission is to empower every individual and organisation on the planet to achieve more. “We want our tech to help the customer achieve more, and in order to do that we need to reflect our customer base in the people who work in Microsoft.”

Christine’s team is evenly split between male and female, she revealed – in what is a very conscious move to reflect the firm’s customer base: “This was a very deliberate initiative; it’s not something that just happened,” she explained, adding that, in terms of diversity and inclusion, another very positive Microsoft adage is ‘Come As You Are, and Do What You Love’. Yes, she admitted, there is opposition to the idea of quotas, but she believes they’re needed: “If you look at the last 100 years or so, we haven’t made huge progress. “If you don’t measure it you don’t see progress, so I’m all for quotas. You have to be deliberate and think beyond comments like ‘the token female’ – you have to look at it as a measurement or quota of how you are doing in terms of gender diversity.

“You have to have that focus. “I would always look to even the balance a bit while always making sure we are employing the right person for the job.” “What motivates me is doing right by people and helping people – seeing something in women, for example, and sponsoring them and bringing them along! “I do love to turn things around, and getting things from good to great is a big thing for me!” Last but certainly not least, she emphasised, one of her primary motivators is fun: “The other thing that motivates me is fun. We work hard but having fun along the way is very important!”

Has she any advice for women on their way up the corporate ladder? “My big thing is, you have to have a voice,.” In the past, she said, she’s been guilty of “keeping the head down and letting my work speak for me.” Not a great strategy, she warned: “If you want something, speak up and claim it. I have learned over the years, that is something you really have to do. “If you do think your work will speak for you, in certain cases it can, but I have seen many women who didn’t claim what they wanted in their career and opportunities passed them by, literally while they had their heads down working really diligently.”

Christine regularly relates a powerful anecdote about a successful woman many years ago whose response to being asked about her personal ‘Secret sauce,’ was simple. “It was 10 two-letter word,” recalls Christine: If It Is To Be, It Is Up To Me.

The True Value of Education

Liz Waters attended college, but, as...

She’s a ballerina and a trained pianist,...