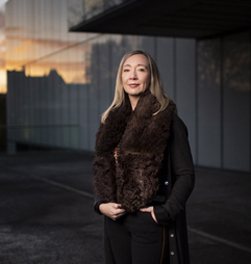 Previous to her new appointment, Ann Mulrooney was the CEO of VISUAL Centre for Contemporary Art in Carlow since 2013.  She takes on her new role at an exciting time in the development of Science Gallery at Trinity College Dublin. Science Gallery has firmly established itself as a national and international leader in the fields of art science and public engagement with science. With over 3.2 million visitors since it opened in 2008, it has demonstrated the interest and appetite among Irish audiences to engage with unique, transdisciplinary exhibitions, events and educational programmes that explore the interface of arts, science, design and technology in connective, participative, and surprising ways.

Ann Mulrooney comes to the role with a passion for creating transformative experiences that link science, technology, engineering, art, and design. Initially trained as a sculptor, Ann went on to run the National Design and Craft Gallery from 2009-2013 and the VISUAL Centre for Contemporary Art from 2013-2018, where she developed ambitious cross-disciplinary artistic programming in STEM-related areas including digital technologies, augmented reality, architecture, design, science, agriculture, engineering and urban planning, with a particular focus on developing public engagement through socially-engaged practice.

Speaking about her appointment, Ann Mulrooney said: “I am delighted to be appointed to lead Science Gallery at Trinity College Dublin into its second decade. It has been an innovative and groundbreaking institution since its inception: in its vision, its international impact and its focus on engaging 15-25 year olds as the pioneers of the future. The combination of scientific and artistic research with meaningful public engagement has enormous transformative potential and I look forward to working with Science Gallery’s national and international partners and stakeholders to realise this.”