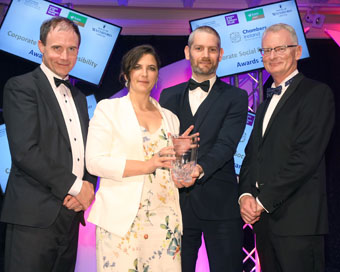 In late September, OpenApp was awarded the Excellence in CSR by an SME in the Chambers Ireland Corporate Social Responsibility (CSR) Awards 2018. OpenApp won for their project Rare100.

Rare diseases affect an estimated 300 million people around the world and 30 million in Europe alone. Despite this, there is no cure for the majority of rare diseases and many go undiagnosed. Rare100 provides a free web-enabled patient registry for patient organisations supporting an ultra-rare condition. This enables organisations to gather data which will improve the lives of people suffering with rare diseases.

Sara Viegas, Product Manager, OpenApp accepted the award on the night saying: “ We are delighted to win this award. Rare100, is a feature rich, free web-enabled patient registry for patient organisations with a population of less than 100 patients. We have a number of patient organisations who are benefiting from Rare100 including ultra rare diseases such as Tay Sachs and MSD. The CATS foundation which is the patient organisation behind Tay Sachs in the UK is close to getting a clinical trial underway, because of their patient registry. This is great news for a disease that has no known cure or treatment. We are humbled to receive this award on behalf of the company and the organisations we work with.”

Founded in 2002, OpenApp, a healthcare IT company that has grown to nearly 50 employees, are blazing a trail to support the rare disease communities. It is the developer of the EU’s Clinical Patient Management System (CPMS – a secure system designed specifically to help in the diagnosis and treatment of patients with rare and complex diseases. It is the IT tool on which the newly created 24 European Reference Networks (ERNs) can rely to remotely work across Europe on patients affected by rare and complex disease.

Recruitment can be a challenge for many...