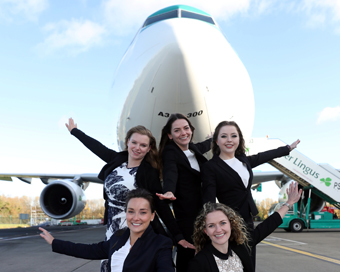 Aer Lingus welcomed 18 new future pilots on their induction day into the Aer Lingus Future Pilot Programme at Dublin Airport. Competition was extremely high for the limited number of positions, with 7,800 people applying.

The highly motivated candidates, 13 male and 5 female, will now undergo pilot training in Jerez, Spain for the next 13 months, before returning to Dublin and applying their new skills to Aer Lingus’ A320 Airbus aircraft.  The ‘Aer Lingus Future Pilot Programme’ is a fully-sponsored, fully-mentored training platform, run by Aer Lingus, for aspiring pilots.

Aer Lingus, Ireland’s only 4 Star airline, has a rich history of supporting first-time pilots and over the last five years has trained and mentored over 50 pilots, all of whom are working for the airline as commercial pilots, as the airline continues to expand and develop new routes. The airline is making a concerted effort to attract more female applicants to its Future Pilot Programme and has a strong track record in supporting female pilots. In fact, it was the first airline in Europe to employ a female pilot, Gráinne Cronin. Currently, Aer Lingus employs twice as many female pilots when compared with the international airline industry average.

The airline has embarked on significant network expansion in recent years having added six new transatlantic routes to its long haul network in the last two years which include Hartford, Los Angeles, Newark, Miami, Philadelphia and Seattle which will began in May this year and recently announced two new routes to Minneapolis-St. Paul and Montreal. The Aer Lingus Future Pilot Programme is anticipated to continue in the coming years, as the airline grows and adds new routes. The future pilots are promised a rewarding career flying modern Airbus A320/1 and Airbus A330 to more than 100 destinations across the UK, Europe and North America.

Lisa Raftery has been appointed to the new...