Having the Courage of Your Convictions 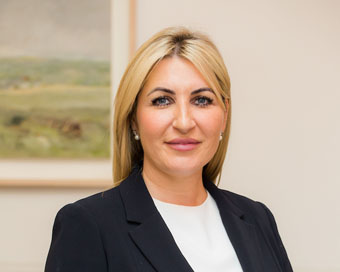 A few years ago, Aisling Keegan was on the final phase of a gruelling eight-day charity trek to the summit of Mount Kilimanjaro.  Physically exhausted, sleep deprived and with a pounding headache from the high altitude and lower levels of oxygen, she refused to allow herself to give up.

“Physically I was tired. My head was hurting,” recalls the Vice-President and General Manager of Dell EMC Ireland.  “Mentally however, I was saying, I could do this; people had sponsored me. “In my head I was saying ‘do not let this headache get the better of you.’ “I kept repeating that same thought.”

She reached the summit.

“The lesson I learned is that it’s not about how capable you are,” she says now. What is really important, and in her case, what really drives her on in her career, are the same characteristics which helped her reach the summit of Mount Kilimanjaro – mental fortitude and resilience. ”That physical test taught me how important mental strength, resilience, and mental determination is in terms of what we achieve,” Keegan recalls now. Enabling others, and giving something back, was, of course, what that exhausting climb was all about for Aisling, who recently received the 2018 WMB Businesswoman Award.

These objectives also underpin how she approaches both work and life: “Motivation for me is very much about enabling others and giving back. “My father brought us up with the saying ‘you’re better born lucky than rich,’” she quips, adding that she believes she is lucky: “There are things that have happened in my life both professionally and personally where I have been lucky. I know there’s an argument that you make your own luck, and I don’t dispute that – I tell the young people on my team that you have to work hard.”

Over the course of her own life, she’s been fortunate, she says: “I got into technology by accident and I now work for a company that enables better outcomes in both the private and public sector, for example.”  Aisling and one of her two sons have also experienced, and recovered from, significant illness. “In life in general, I feel very lucky.” Therefore, she explains, she feels compelled to give back: “Because I feel lucky, my personal core set of values is that, regardless of what you do in life, either as a leader, a mentor, a wife or mum, what is important is ‘how can I make a positive impact in enabling others, be they customers uncovering potential applications, or helping my team members to grow and develop in their careers.” She quotes the poet Maya Angelou: “She said if you learn, teach and if you get, give.  “I’m constantly learning. I know I’m learning from others – from clients, colleagues, husband, children. “My driving motivation factor is a sense of doing better for others and to continue to learn from others.”

Aisling believes in sharing her own experiences as a way of helping others. This is about being prepared to share vulnerabilities, and to openly discuss some of the thoughts that went through her own head as a young worker starting out more than 20 years ago, in a heavily male-dominated IT sector: “I now do a lot of mentoring, both inside and outside the company. I wish that when I was starting out we had had both male and female role models who shared their own vulnerabilities and insecurities and had a bit more openness. “As an authentic leader you have to be prepared to share some of the insecurities and vulnerabilities that you felt as you were going through your career.” It’s not an easy thing to do she acknowledges, but she feels strongly that leaders in every sector of the workplace have a duty of care and a responsibility to share something of their own experiences, with the next generation of leaders coming into the workplace.

She recalls how, she was, many years ago now, asked to set up a new chapter, or Employee Resource Group, at Dell. It was called Women in Search of Excellence: “I was a young female in a leadership position and I’d had a great career to date, but I’d always felt that one day someone is going to find out that I wasn’t as good as they thought I was!” She kept that insecurity to herself until the first meeting of the Women In Search of Excellence Employee Resource Group ­– now called the Women In Action Employee Resource group.  “We decided that the way to initiate the programme was to speak openly with each other in a very safe environment.  “Because I was responsible for leading it, I decided to share some of the feelings I’d had since I started out. “I described this feeling of Impostor Syndrome and every woman in the room nodded their head! They all felt the very same! “I think when you establish an environment of trust and openness men will tell you that they too have felt insecure or vulnerable – they just tend not to share it.” “The feedback I’ve received from young women is that they can sometimes be afraid to bring a piece of themselves to the table. “For me there is this responsibility on leaders to share our experiences and help others to navigate some of the experience they may be having in their environment.”

Has she, as a very visibly successful businesswoman, any tips to ‘throw down the ladder’ to young women starting out on the corporate journey?  Aisling ponders the question. The lessons of the Kilimanjaro trek, which highlighted for her the importance of mental strength, resilience, and mental determination are good ones, she says: “My advice to young women out there is be bold, be brave, be yourself and have the courage of your convictions.”

Tamara Lohan was bitten by the travel bug...