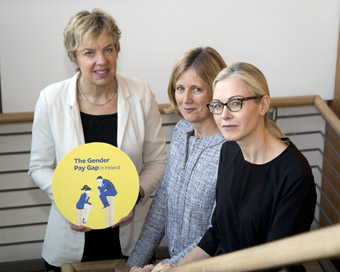 The new bill will pave the way for the introduction of regulations that will require employers to publish information relating to the pay of their employees for the purpose of showing whether there are differences in the pay of male and female employees and, if so, the scale of such differences. The publication of the bill follows the UK’s introduction of similar legislation earlier this year.

Speaking at the event, Senator Ivana Bacik, Barrister and Reid Professor of Criminal Law, Criminology and Penology at Trinity College Dublin said: In Ireland, women earn approximately 14% less than men, a figure equating to women in full-time employment working for free for about over one month in every year.”

“Despite changes in gender equality generally and progressive change for women’s rights in Ireland over the past 11 years, it has been estimated that the gender pay gap has narrowed only four percentage points. At current rates, the National Women’s Council estimates it will take up to 170 years before it fully closes. We cannot wait that long, and the government should take the opportunity to now proceed with legislation.

Mary Brassil, Partner, Employment Pensions and Incentives Group, McCann FitzGerald said; “It is important that the gender pay gap should not be confused with the concept of equal pay for equal work as the existence of a gender pay gap does not necessarily indicate discrimination by employers or that women are not receiving equal pay for equal work. The gender pay gap is the difference in the average gross hourly pay of women compared with men in a particular organisation, such that it captures whether women are represented evenly across an organisation.”

“For those organisations reporting a high gender pay gap, this could be seen as less than fully committed to fair pay, promotion and development opportunities for women, making them less attractive as employers and undermining their ability to recruit and retain key talent.”

Tamsin Sridhara, Senior Director within Willis Towers Watson’s GB HR consulting team and leader on Gender Pay Gap Reporting said, “The UK regulations have been very effective at pushing gender diversity up the board agenda. In year one the focus has been on the size of the gap but what matters over the longer-term is that organisations are delivering on their commitments to increase talent diversity at all levels of the organisation.”

“One particular challenge for HR teams is that it takes a lot of time in the first year to collate the right data for the calculations. But HR teams need to think and plan beyond the numbers. When the numbers are published, employees want to know what companies are doing to address the gap, so HR teams also need to consider the broader talent diversity and inclusion implications.”

The event was focused on offering practical guidance on the methodology and resources required for gathering the relevant data, how to implement an effective communications strategy and the steps employers should take now in order to prepare themselves for gender pay gap reporting.