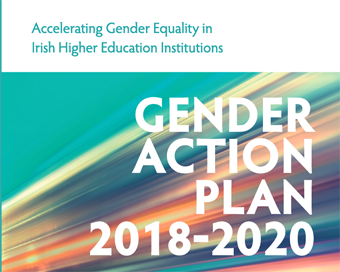 Minister Mitchell O’Connor stated that, “Data analysis carried out by the Gender Equality Taskforce in the Action Plan shows that on present trends, if institutions continue with current practices, it could take more than 20 years to achieve 40% gender balance at professorial level. This would be an unacceptable scenario to which a decisive response is now imperative.  The Minister went on to say, “This Government and I are committed to eradicating gender inequality in our HEI’s. I am insisting on institutions setting ambitious targets for 1 year, 3 years and 5 years. I want 40% of professors within our institutions to be female by 2024. I believe that reflecting the seminal work of the Expert Group Report which is now reinforced by the Action Plan the Higher Education system is committed to that outcome”.

“My clear and strong message today [Monday 12th Nov] is that we are now making a decisive break with the past.  Gender inequality has no place in the Higher Education system. This progress achieved under this Action Plan will be accelerated by a pathbreaking positive action measure – the plan to create new and additional gender-specific senior academic leadership positions in our universities and IOTs.”

The six major actions from the work of the Taskforce include:

Ireland’s research-funding agencies have welcomed the launch of the Gender Equality Taskforce report. The Irish Research Council;  Science Foundation Ireland;  and the Health Research Board commended the Taskforce for its work to promote gender equality within the higher education sector. The three agencies particularly welcomed the opportunity to restate their commitment to making gender equality accreditation in higher education institutions a condition of funding, and they jointly support the requirement that institutions must maintain this accreditation.  The Higher Education Authority will have responsibility for determining the optimal timing and specific requirements for institutional Athena SWAN certification.

The Athena SWAN Charter is an internationally recognised ‘quality mark’ for gender equality administered by Advance HE in the UK. Accreditation indicates that a higher education institution has demonstrated its commitment and work in advancing gender equality across all academic disciplines. Accreditation is made at bronze, silver and gold levels.

Recognising the importance of gender equality to their missions, the funding agencies have enhanced inter-agency collaboration and have established a funders’ gender equality forum. Commenting on the Taskforce’s report, Director of the Irish Research Council, Peter Brown, said: “The Council welcomes the recommendations of the gender equality taskforce report and notes the significant work that is being done within the sector to tackle gender discrimination.“As a research funding agency, the Irish Research Council is committed to promoting gender equality in research careers across all disciplines. Regardless of gender, Ireland’s researchers should be able to reach their full potential at all stages of their career. This is essential in order to ensure that we can attract, support and retain the most talented and innovative individuals. “We look forward to continuing to collaborate with SFI and the HRB and to moving towards greater gender equality and parity in higher education and research.”

Dr Darrin Morrissey, Chief Executive at the HRB added that “The HRB welcomes the Taskforce’s recommendations in relation to the Athena Swan Charter. The recommendations are a sensible approach, and one that the HRB is happy to support. We will collaborate with our colleagues in partner agencies to continue to drive gender equality in all aspects of our work. “In the short-term the HRB will consider the report in full, and then in partnership with other stakeholders, we will amend our policies and practices to support this systems-wide approach to gender equality.”

Commenting on the publication of the report, Dr Marion Boland, Head of Research Policy at Science Foundation Ireland, said: “Science Foundation Ireland welcomes the publication of the Gender Equality Taskforce report.  The underlying causes of the gender imbalance at decision-making levels across all sectors are numerous and complex. Over the years, Science Foundation Ireland has been at the forefront in developing initiatives to remove and mitigate any existing or perceived factors that may limit the participation of women in STEM careers and, in particular, to redress gender imbalance amongst SFI award holders.“We remain focused on working in partnership with other funders to ensure a two-pronged approach; the first from the bottom up to support researchers at the most critical junctures in their careers and the second from the top-down, whereby the institutional culture can be made more aware of gender issues and become proactive in redressing gender imbalance. The latter is being addressed by the Athena SWAN Charter in Ireland.”

You can read the Gender Action Plan here>>

A Conversation with SMEs

A new industry-led report – The Future of...

Level of Job Stress in...

A new ESRI study, funded by the Health and...