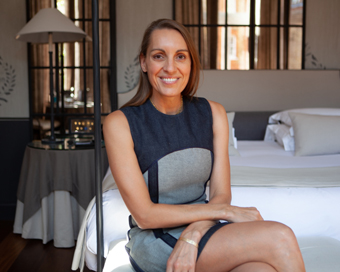 Tamara Lohan was bitten by the travel bug early on. While growing up in Spain, she regularly travelled to the UK to see her father. Later, she explored South America; flying to Brazil after university and spending a year working in Sao Paulo. So when Tamara met fellow nomad – now husband – James, it made sense that they would take their passion for adventure and turn it into a successful business.

Mr & Mrs Smith  – “a travel club for hotel lovers” – started as a guidebook of UK hotels, in 2003, following the couple’s frustration with their hotel experiences.

The guide evolved into an online travel club: each hotel or villa is reviewed by a team of experts, giving members recommendations for weekends in the countryside, family holidays by the sea, luxury villas in far-flung locations, and cultural city breaks.

Being new to the industry they approached the business from a consumer perspective. “We were frustrated by the existing guides, and that frustration led to our creating the kind of product that we wanted as a consumer.”

They “made it up as we went along.” Tamara claims that when starting in business, naivety is a “very wonderful thing because you can’t see the pitfalls around the corner.” Their persistence paid off and the couple received MBEs for their contribution to the travel industry in 2014.

Tamara explains that the name Mr & Mrs Smith is a “throwback to a post-war era where it was frowned upon to be in a hotel room with someone to whom you weren’t married. So, Mr & Mrs Smith would be the name you would use in the guestbook.”

She says she’s happiest when she’s travelling no matter where that is: “weekends in the UK get me just as excited as a trip to Uxua Casa (a boutique hotel in Brazil). I don’t care as long as I’m on the road.”

Clocking up 135 countries between them, the couple did the “hard travel” – “they were on a plane every week” – before son, Tom, 11, and daughter, Ally, 8, came along. While having children has trimmed, rather than clipped, their travel wings, Tamara jokes that they’re “raising mini hotel inspectors”.

The children tend to judge a hotel by the swimming pool, she says, although Tom is becoming aware of how service affects your hotel stay. “He picks up that somebody has been very helpful or very nice and smiley.”

She says the entrepreneurial life is “a rollercoaster. You have to make compromises; you have to make sacrifices. It’s a tough game, but it can also be extremely rewarding.”

Add parenting to the mix and Tamara admits to feeling guilty all of the time. However, she’s pragmatic about the highs and lows. “Some days I feel like I’m on top of the world, things are going my way, everything falls into place; while other days I feel like it’s all falling apart.”

“Though, I think that’s just life,” she adds.

Demand from members was a deciding factor in pivoting the business to a hotel booking engine as well as capitalising on the success of the guide which was driving business to the hotels ­­– for some UK hotels it represented 40% or 50% of their weekend business.

The timing was right; in 2005 people had started trusting the internet with their credit cards. Shortly afterwards the recession hit, but Mr & Mrs Smith bucked the trend, and the company grew. Tamara says travel is “generally a recession-resilient industry”. People don’t give up their holidays; “they may travel smarter, or they’ll book offseason to save money.”

Mr & Mrs Smith has 1170 hotels and 269 villas in 471 locations, with prices ranging from affordable to luxury: from £50 per night for a boutique bed and breakfast in Cambodia to £13,000 per night for a “rock star” villa in Ibiza.

The first guide included a card inviting readers to register their details which allowed Tamara and James to communicate with them. She says that personalised approach is still a fundamental part of the business.

With 1.5 million members from 175 countries – Tamara explains the appeal of the club model. “I do believe that if you’re a member of something you value it more. We’ve called it a club because that’s the kind of service we want to give to members.”

When asked about working with her husband, Tamara is effusive in her response. “I love it,” she says. “We have huge respect for what the other person does”. It helps that they have clearly defined roles in the company – Tamara is the chief technical officer, while James looks after branding and marketing.

Recently the couple made a bold move to take the company to the next level, launching a fundraising campaign on Crowdcube. It paid off: in the first 12 hours, Mr & Mr Smith raised £1 million.

The funds are earmarked for their growth plans; a key part of that strategy was buying out cultural experiences company, SideStory, earlier this year.

As a female entrepreneur, Tamara is inspired by her mother who retired from running her own dating agency earlier this year.

Although the businesses are very different – her mother’s was “very offline and one-on-one with clients” – Tamara says with a laugh, “I guess we could say we are matchmakers: for people and their perfect holiday.”

Having the Courage of Your...

A few years ago, Aisling Keegan was on the...