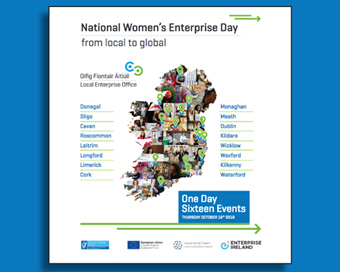 National Women’s Enterprise Day (NWED) 2018 takes place on Thursday, 18th October, with 16 major female entrepreneurial events planned which will attract over 1,000 women in business and female entrepreneurs from across the country. This year the Local Enterprise Offices have organised a programme of events under the theme “From Local To Global”, aimed at inspiring and educating the next generation of female business leaders to take their local ideas and make them a global success.

A half day event with lunch organised by LEOs in Meath & Louth at the City North Hotel and Conference Centre in Gormanston, Co. Meath. Featuring: Anne Reilly of Paycheck Plus, Professor Colette Henry of the Department of Business Studies at Dundalk Institute of Technology and Louise Caulfield of Caulfield Country Boards.

A LEO Sligo evening event at the Radisson BLU Hotel in Ballincar. Featuring: Martina Hamilton of the Martina Hamilton Collection, The Hamilton Gallery and The Cat and The Moon, Bernie Butler of Good4U foods and Oonagh Monahan of Alpha Omega Consultants.

To find out more visit here>>

This one-day tech gathering will be hosted...