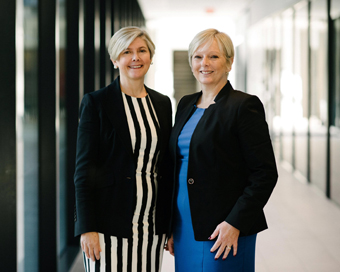 CloudKPI, the Dublin, Ireland based company that has created a unique analytics solution for SaaS companies worldwide, has won a $500,000 investment from Connecticut Innovations, as one of the winners (and sole European winner) of its worldwide Venture Clash competition. The competition attracted over three hundred entries from around the world.

This prize fund will be part matched by other investors helping CloudKPI close out its $1 million seed funding round. CloudKPI’s promoters Brenda Jordan (pictured right) and Maeve Kneafsey (pictured left) hope to complete this round by the end of November with a mix of existing Irish investors and new US investors. CloudKPI has previously been supported by Enterprise Ireland. The new money will allow CloudKPI to build their sales, marketing and development teams. They will immediately address their main markets in Silicon Valley and New York, selling CloudKPI’s unique insights’ software to the burgeoning SaaS market.

The SaaS (software as a service) analytics market is currently valued at $7.5bn and is expanding at 20% per annum. Successful SaaS companies grow at an extraordinarily rapid rate and CloudKPI’s software helps those businesses keep track of their most valuable customers and successfully access live across-the-business metrics.

CloudKPI has identified a new market that is embracing its product. In a new trend amongst North American tech companies, they are outsourcing their CFO, financial planning and analytics functions to dedicated ‘Outsourced CFO’ firms. These specialist firms (some with up to 800 professional staff) are using CloudKPI’s software to save many hours of manual financial modelling in Excel, a substantial time saving per client, affording these finance professionals the time and space to give more valuable strategic advice to their clients.

Connecticut State’s Venture Clash programme, now in its third year, has a $5 million prize fund. Two thirds of this investment fund were given to much later stage companies based in Israel, Canada and the US. CloudKPI was the earliest stage company to have won one of these major prizes.

According to CloudKPI co-founder Maeve Kneafsey, “This prize is fantastic validation for our product. We were faced with extraordinary competition from clever companies from around 130 countries, worldwide. The judges, all well versed in vetting start-ups were so positive about us that we now want to do them, and ourselves, proud by building a substantial and successful company, with bases in Ireland and Connecticut, USA – an ideal location between our main markets of New York and Silicon Valley.”

According to Matt McCooe, CEO of Connecticut Innovations, “The market for CloudKPI’s technology is right here in the United States. In addition to a strong leadership team and technology, the team is extremely committed to Connecticut with plans to move both founders here. We look forward to working with them as they accelerate the growth of CloudKPI in our state.”

Axonista and Off the Fence is to launch the...