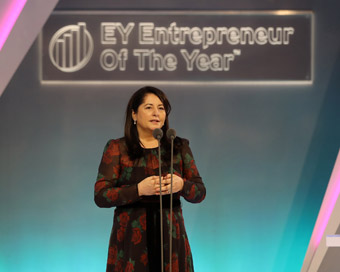 Dr Elaine Sullivan, co-founder and CEO of Carrick Therapeutics, was named winner of the 2018 EY Emerging Entrepreneur of the Year TM (EOY) Award at the 21st annual awards ceremony held in Dublin recently.

Carrick Therapeutics was established in 2016 with the aim of building Europe’s leading oncology company. It brings together world-class cancer researchers and drug development experts, backed by some of the most eminent scientific investors.

The company, which has raised $95 million in funding, is a University College Dublin (UCD) spin-in company and is headquartered at NovaUCD, the Centre for New Ventures and Entrepreneurs.

Tom Flanagan, Director of Enterprise and Commercialisation, UCD said, “I would like to take this opportunity of congratulating Dr Elaine Sullivan, CEO, Carrick Therapeutics on winning the prestigious 2018 EY Emerging Entrepreneur of the Year Award. Elaine is a highly valued member of our community of entrepreneurs who chose to spin-in her company to UCD and locate at NovaUCD and winning this Award is truly well deserved.”

He added, “I would like to wish Elaine and her team continued success as they develop first-in-class treatments to target aggressive forms of cancer.”

Kevin McLoughlin, Partner Lead for the EY Entrepreneur Of The Year™ Ireland said, “We are delighted to be celebrating the 21st year of the programme in Ireland. Over that time, we have seen a huge diversity in terms of the participants and the companies they are representing.”

“Elaine Sullivan and her team at Carrick Therapeutics are doing truly life altering work. They have set out to make a real difference to people’s lives and I look forward to seeing what they can achieve. All the finalists, their families and their employees can be proud of their achievement.” “The standard this year, as in previous years has been extremely high. On behalf of EY I would like to congratulate all of our 24 finalists, and in particular Teamwork, Beannchor Group and Carrick Therapeutics.”

The EY Entrepreneur Of The Year™ Ireland programme is designed to support, promote and connect Ireland’s entrepreneur community, and the Teamwork will now go on to represent Ireland at the World Entrepreneur of the Year Awards event in Monaco, in June 2019.

CloudKPI, the Dublin, Ireland based company...

Tech Person of the Year Award...

The winners of 8 categories in the it@cork...