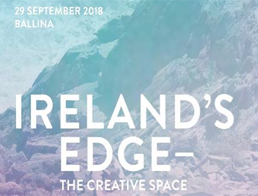 Ballina-born Scientist-Astronaut candidate Dr. Norah Patten; Professor John Naughton, University of Cambridge’s CRASSH (the Centre for Research in the Arts, Social Sciences and Humanities) Senior Research Fellow; Eamonn Sinnott, VP and GM of Intel Ireland; world renowned Westport harper Laoise Kelly; Editor of The Journal of Music, Toner Quinn, and Director of Design and Innovation at HUB Control and President Emeritus at Institute of Designers in Ireland, Kim Mackenzie-Doyle are just a handful of the speakers and performers confirmed for Ireland’s Edge – The Creative Space.

The day of discussion, debate and performance, running alongside the inaugural Other Voices Ballina, takes place on Saturday September 29th, 2018 from 11am, in the Jackie Clarke Collection on Pearse Street in Mayo town.

Ireland’s Edge – The Creative Space will explore how places on the edge – like Ballina and Dingle – can develop and thrive into the future, as part of a world in flux, with exponential changes in technology, geopolitics, economic, social and business models and profound shifts in demographics and regional imbalances. How do we create communities that are sustainable, engaged and stable, where culture and creativity are highly valued? Ireland’s Edge – The Creative Space will look at how creativity, imagination and empathy are becoming more central in shaping our world, driving growth and nurturing healthy, resilient companies, organisations, regions and societies. Innovators in arts and culture will meet with fellow creators and thinkers in technology and industry to discuss the importance of collaboration and diversity and explore ways in which we might best work together to create global opportunities for Ireland and particularly for regions geographically located on the edge.

Intel’s Eamonn Sinnott, a member of the Ireland’s Edge team from the outset, and a consistent advocate of STEAM (the inclusion of arts alongside science, technology, engineering and mathematics), will present the keynote address addressing the importance of creativity in technology.  Scientist – Astronaut candidate Dr. Norah Patten will speak about the conditions which must be put in place for creativity to flourish. Norah’s focus will be on the value of introducing young people to science, technology, art and the natural world from an early age and the importance of wider cultural engagement in places on the edge, like her hometown of Ballina, and how her community helped to shape and influence her life choices.

Muireann Kelliher, Chief Development Officer at Glen Dimplex and co-founder of Ireland’s Edge will bring together some of Ireland’s most distinguished thinkers in design and innovation including Kim Mackenzie-Doyle, Head of Design and Innovation at Hub Controls and President Emeritus at Institute of Designers in Ireland, Enda O’Dowd, lecturer in Product Design at the National College of Art and Design and Michael Murray, Innovation Manager at Hollister in Ballina, for a discussion on STEAM’D and the role of design in bringing users into the heart of innovation, from ‘traditional’ applications in product innovation, to a much broader adoption in developments of services and systems, in the private and public spheres.

Ireland’s Edge – The Creative Space is presented in partnership with Intel Ireland and Hollister ULC and is part of the annual Ireland’s Edge Culture & Creativity Conference, which takes place in Dingle, Kerry each December.  www.irelandsedge.ie // Facebook @IrelandsEdgeHQ // Twitter @IrelandsEdge // #IrelandsEdge

The Society of the Irish Motor Industry...