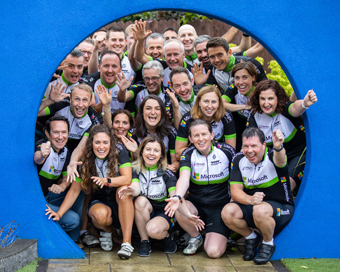 Microsoft employees are soon to set off on a 350-kilometre cycling challenge along the Wild Atlantic Way in support of Ireland’s only Children’s Hospice, LauraLynn. On September 5th, 65 cyclists and 17 crew will take to the roads in Kinsale to complete their challenge over three days, arriving in picturesque Kenmare on September 7th.

The truly inspirational care being provided for children at the LauraLynn facilities in Leopardstown has motivated and empowered the Microsoft team to get back in the saddle for the fifth year running and build on the €170,000 they’ve fundraised in previous years for the organisation.

In marking the launch of the cycling challenge, Cathriona Hallahan, Managing Director of Microsoft Ireland said: “Microsoft has a long history of supporting LauraLynn. As a charity located close to our campus in Leopardstown, we have developed a strong, positive partnership with the inspirational team at LauraLynn. Through software donation, technology training and employee-led activities such as the Wild Atlantic Way charity cycle, we partner with LauraLynn to support the life-changing work they undertake on a daily basis.”

Also commenting was Orla O’Brien, CEO of LauraLynn Children’s Hospice: “We are humbled at the continued support shown to LauraLynn by Microsoft Ireland. This is the fifth year that Microsoft has selected LauraLynn as their charity partner for their annual charity cycle, which this year runs from Kinsale to Kenmare – no mean feat! We know the Microsoft team have always gone the extra mile when raising funds and awareness for LauraLynn, which has had a significant impact, and we are so grateful for their continued support. It is heart-warming to see such enthusiasm and dedication from the entire Microsoft Ireland team who are wholly committed to their fundraising target and cycle challenge. I would like to say a big thank you to all the cyclists, and along with all the staff at LauraLynn, wish them well on their journey.”

The 65 cyclists and 17 crew from Microsoft begin their journey on Wednesday, September 5th setting out from Kinsale, Co. Cork and arriving at their destination of Kenmare, Co. Kerry on Friday September 7th. The team will cycle for approximately 7 hours per day, travelling an average distance of 120km.

To find out more about the LauraLynn Children’s Hospice, please visit here>>

Matheson has announced that it will continue...