It’s Time to Move the Needle 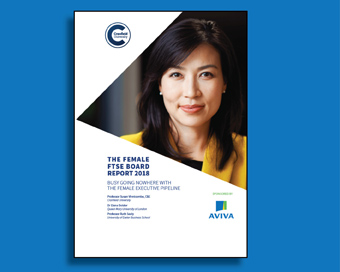 A recent report published by Cranfield School of Management has criticised the lack of progress in improving gender diversity at the highest executive echelons of UK’s FTSE 350 companies. Despite progress in female representation on non-executive board positions, the report identifies the lack of women in executive roles on boards of the UK’s leading companies.

In a 48-page detailed analysis, experts from the school’s International Centre for Women Leaders scrutinise data provided by the UK’s top 350 companies. Drawing on 20 years of experience in this area, the Female FTSE Board Report’s authors identify the leading players in gender diversity in the FTSE 100, and highlight those companies that are lagging behind the rest.

FTSE 100 – while the percentage of female non-executive directors is at an all-time high of 35.4%, female executive positions have flat-lined for a fourth consecutive year at 9.7%. Despite this the percentage of women on boards has increased from 27.7% in October 2017 to 29% in June 2018, meaning it may be possible to reach the target set by the Hampton-Alexander Review of 33% by the end of 2020.

Female directors are on average nearly two years younger than their male counterparts, but serve for less time and have an average tenure of 3.7 years compared to 5.4 years for men.

Professor Sue Vinnicombe CBE, Professor of Women and Leadership at Cranfield School of Management, said: “Now, more than ever, is the time for disruptive change. We need to think big and act decisively in order to move the needle. FTSE 350 companies need to treat gender diversity as seriously as they treat sales, risk management and innovation, otherwise nothing will change.”

Aviva has sponsored the Female FTSE Board Report since 2017. Sarah Morris, Chief People Officer, Aviva is also a non-executive director on the Aviva Investors Board. She said: “There has been some progress over the last 20 years, and it’s encouraging to see the biggest companies in the UK on track to hit the 33% target. But that is still only 33%. The benefits of greater diversity are clear so now it’s up to the FTSE 250 to increase their ambition. Still too little is being done to change the cultures which prevent talented women staying and rising to the top. We urge companies to act faster, for the sake of their people and their business.”

Professor Ruth Sealy, Director of Exeter Business School’s Centre for Leadership and co-author of the report, said: “The lack of diversity amongst executives of so many FTSE companies, even in functions which have balanced or majority female intakes, reveals such poor management. Organisations must now be bold and decisive in designing senior roles and careers fit for the 21st century in order to optimise the available talent”.

In preparing their report, Cranfield’s experts interviewed men and women serving as functional directors on UK’s FTSE 100 executive committees – the most senior management rank below board level – about their career trajectories and leadership experiences, drawing comparisons that provide useful insight into how companies can better nurture female leadership talent internally.

Traditionally, functional heads (HR Director, General Counsel, Communications Director) on these committees have not been considered for board roles, as they are seen as having narrow functions and lacking operational experience and business acumen, but the report’s authors challenge these misconceptions and argue they represent a significant pool of executive talent that is too-often overlooked.

The study offers several recommendations to help boost the female executive talent pipeline. These include:

Dr Elena Doldor, Senior Lecturer at Queen Mary University and Visiting Fellow at Cranfield School of Management, led the interviews. She said: “Our interviews show that men and women have different experiences of progressing into senior leadership roles. Developmental organisational cultures and sponsors were critical to the career progression of the senior women we interviewed. Leadership does not emerge in a vacuum. If companies are serious about developing the female executive pipeline, they should ensure that their organisation truly enables talented women to flourish as leaders.”

Are women returners the possible solution to...

An Taoiseach, Leo Varadkar, Minister for...