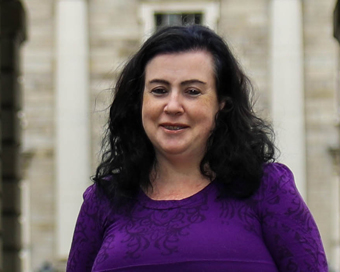 Having a stroke is life-changing for most people – but former clinical nurse specialist Niamh Malone (pictured) used her own gruelling experience to help others.
She’s developed a special app to deal with one of the most debilitating follow-on symptoms of strokes – chronic fatigue.

People who’ve had stroke or head injuries can develop chronic fatigue which can leave you wiped out,” says Niamh, who had a stroke five years ago, and says the overwhelming sense of fatigue experienced by sufferers in the aftermath, is like “hitting a wall without any warning.” “ It can leave you wiped out,” she recalls adding that she created Fatigue Friend, “in order to function over the day.”

The app, explains Niamh, “functions like a storm warning system which enables you to observe and reassess your condition every few hours.  “It also gives advice on how to manage your situation and stave off an attack,” says the Dubliner, whose app, which is currently at the testing stage, will launch in Ireland next October and across Europe in 2019.

Niamh and her company BraineyApp – is currently one of 10 founders, four of them female, all from the digital health start-up sector across Ireland and Europe who are participating in a new European incubator programme hosted by Trinity College Dublin. The programme aims to identify new technologies that promote healthy living, support active ageing and improve health care systems.

The EIT Health Validator is hosted by the university’s Innovation & Entrepreneurship Hub in collaboration with EIT Health (European Institute for Innovation and Technology). The first of its kind in Ireland, the health tech incubator is open to professionals and researchers working in the medical and technology sector across Europe. The incubator aims to support early stage digital health start-ups in validating their business ideas and identifying suitable markets for their products.

The ten start-ups, which include several entrepreneurs from Ireland as well as founders from  Germany, Netherlands, Spain, Finland and Poland and Latvia, will participate in six weeks of intensive validation and mentoring activities at Trinity before embarking on a two-week tour of four health tech hubs across Europe — TU Delft, Netherlands; Grenoble EM, France; Imperial College London and Newcastle University. This tour is designed for rapid multi-market validation.

“I applied for the Health Validator because it gives you such a broad overview of the healthcare system in Ireland and also explains how best to penetrate the health products market,” explains Malone, who is one of just two Irish-based female founders on the course.

“It also features a lot of road trips around Europe so it provides an insight into potential markets for your product in France or the Netherlands or the UK, for example.” 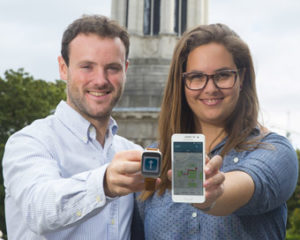 The second Irish-based female founder on the programme, Talita Holzer was studying Engineering at Trinity College when she came up with her idea for the award-winning way2Be app, a smartphone and smartwatch solution to enable people with intellectual disabilities to navigate by themselves, while providing peace of mind to loved ones.

In 2014, Holzer, from Sao Paula in Brazil, was working on an engineering module in innovation and product development as part of her course at Trinity: “The idea was to solve a real-world problem, and the problem we chose was to help integrate individuals with intellectual disability into society,” Holzer explains. She and co-founder Robbie Fryers found lack of independence to be a major issue for people with disability: “They wouldn’t have the independence to walk somewhere themselves, or travel by public transport – they’d have to have a carer with them anywhere the wanted to go.”

The duo came up with the way2Be app which works by providing simple, clear, icon-based directions to a particular destination on a smartphone or smart watch. Because the routes are specifically tailored by a parent or guardian who is familiar with the route to be taken by the person with disability, the directions are both safe and specific to the user’s abilities and needs: “It can tell the user where and when to cross the road,” explains Holzer, who says way2Be is currently being pilot-tested in Ireland with a number of nationally recognised agencies who work with people with intellectual disability – St John of Gods, Stewarts Care and Blossom Ireland. way2Be will undergo pilot tests in the UK in August.

The company plans to launch the product in Ireland and the UK late next year, following which it will expand its reach across Europe. For Holzer, the incubator is a crucial stepping stone to achieving this ambition: “The incubator is a great opportunity – it will help us advance our solution and help us take it to the market.

“It gives us the opportunity to validate this idea in other countries.” She and Fryers are also making the most of contacts with foreign programme participants who have very valuable insights to share on how way2Be can best penetrate markets abroad. “This is very valuable feedback,” she observes adding that the course also provides very good mentors who specialise in areas such as fundraising, investment, sales and marketing. “All of this is very important to us, plus we’re also creating contacts with potential clients – for example meeting people from the HSE.”

Things are looking good for Holzer and Fryers– way2Be last year won the Irish leg of the 2017 James Dyson Award and is currently one of the finalists of the UK-based Tech4Good Award. “The decision will be made by popular vote. We’re competing against companies such as Facebook and Microsoft and we’re the only Irish company that was shortlisted,” reveals Holzer.

People can vote through the link here or by using the hashtag #T4GWaytoB on Twitter.

The high calibre of Irish entrepreneurs has...

It’s all in the Planning

Sinead Bryan is no stranger to change and...