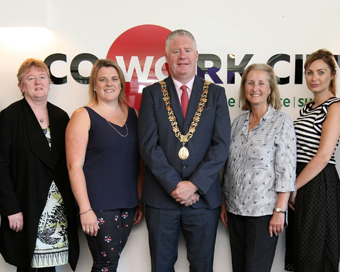 Recently COwoRK City, a new 4,500 sq.ft. co-working space for start-ups at Cork City Hall was launched by the Lord Mayor, Cllr. Mick Finn in the presence of an Tánaiste, Minister for Foreign Affairs and Trade, Simon Coveney T.D.

As part of this Cork City Council and Local Enterprise Office (LEO) Cork City initiative, fledgling companies, funded by LEO Cork City, can develop their business idea in a city centre space before graduating to other spaces around the city when they need to scale up. Lord Mayor of Cork, Cllr Mick Finn said: “Aside from having access to a well-located modern and open plan office, the start-up micro enterprises at COwoRK City will also have crucial access to onsite mentoring and support from the Local Enterprise Office, Cork City. This project is about nurturing micro businesses which we hope, in time, will create jobs and add to the entrepreneurial diversity of the city”.

The space will provide dedicated desks for 15 LEO companies as well as housing a Cyber Security Accelerator Programme which is managed by Cork BIC. In total, it will have desk space for more than 36 companies. For a nominal fee, businesses will have access to meeting rooms, coffee dock, breakout space and conference facilities. This innovation space will also be used for bootcamps, networking and workshops. Preference will be given to businesses operating in the areas of manufacturing or with potential to become internationally traded services and graduate to the Enterprise Ireland portfolio.

Cork City Council, CE Ann Doherty said: “COwoRK City is a key part of Cork City Council’s innovation and entrepreneurship strategy as start ups have made it known that they would rather be based in the city centre. This project is about building upon and complementing a number of fantastic co-working spaces in the city centre such as Republic of Work, Plus10 and BoI Workbench and improving and strengthening the burgeoning innovation eco system in Cork”.

Tigers Childcare is teaming up with Irish...