Women Lead at the CSNA! 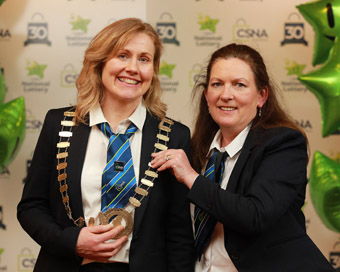 There are 37,400 retail and wholesale businesses operating in Ireland and the Irish retail sector employs almost 285,000 people.  With over 70% of these jobs located outside of Dublin, it is a hugely important industry for our economy. Retail is one of the biggest contributors to the Irish exchequer, generating 23% of total tax receipts in Ireland and over the past three years, tax revenue from retail has grown to over €7 billion.

With over 1,500 members, The Convenience Stores and Newsagents Association of Ireland (CSNA) is an independent association that is run by retailers for retailers. Last month, the CSNA celebrated its 30th anniversary with a Gala Dinner and National Conference in the Fitzpatrick’s Castle Hotel in Killiney, Co. Dublin.  Over 500 attendees enjoyed presentations by Joe Barrett COO of Applegreen and Willie O’Byrne MD of BWG Foods.

Over the last three decades, there has been huge change within the retail sector, not least the debate over the contentious Alcohol Bill.

One person who lobbied hard to achieve a more ‘agreeable’ outcome to the Bill on behalf of CSNA members was outgoing president Ann Martyn.  Prior to her role as national president Ann served as Secretary of CSNA Laois branch before joining the CSNA National Executive. A second generation retailer, Ann took over the business from her mother and runs a very hands on ship at Centra in Mountrath, Co. Laois.

This very busy lady is also involved in School and Community organisations in Mountrath and manages to find time in her hectic diary to be the Post Mistress. Reflecting on her time as national president, Ann acknowledges that it was enjoyable but ‘challenging’ term: “There are many stand out moments to reflect on, the highlight of my term would have to be the battle we faced in relation to the Alcohol Bill, this was huge for our industry and our members. We lobbied hard on this at all levels of government and with the trade and achieved an agreeable outcome on behalf of our members and I am extremely grateful to CSNA for giving me as a member a platform and a voice through which I could make a real difference to the national agenda to protect my business.”

WMB was pleasantly surprised by the strong representation of women at the helm of this professional association. During last month’s CSNA event, there was the official handing over of the chains from their past president Ann to another women who means business, incoming president Marcella O’Neill.

Marcella served as vice president during the 2017/18 term of office. She and her sister Ann run O’Neill’s Mace in Upper William’s Street in Limerick. O’Neill’s is one of the longest established businesses in the City and has traded in Upper William Street for over three generations with each generation growing, developing and expanding the business into the successful 3000 sq. ft. store it is today.

An active member of The CSNA since inception, Marcella firmly believes in the valuable benefits it gives to its members and acknowledges that: “As retailers, we need someone who is as passionate as we are about our businesses to represent us and who will do that best? Only another retailer… That’s the key to the success of The CSNA.”