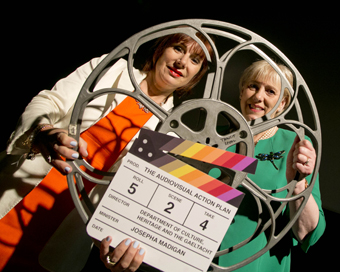 The Minister for Culture, Heritage and the Gaeltacht, Josepha Madigan T.D. has launched her Department’s €200m Audio-visual Action Plan.  The industry-wide, long-term plan,under the Creative Ireland Programme, will support the Government’s ambition to enable Ireland to become a global hub for the production of Film, TV drama and animation.

The report’s key recommendations include:

Consider extending Section 481 tax relief, as well as increasing the expenditure ceiling, revising the regulations and extending the relief to Ireland’s games sector.

Increased capital funding for the film sector including co-production and development funding, a specific fund for the development of films and TV drama, a fund for new Irish TV drama, a regional production fund and additional training of film workers and crew.

The Audio-visual Action Plan is underpinned by an Economic Assessment of Ireland’s Audio-Visual Industry carried out by international consultants Olsberg SPI with Nordicity on behalf of the Departments of Culture, Heritage and the Gaeltacht, Communications, Climate Action and Environment and Business, Enterprise and Innovation. As well as measuring the size and impact of the industry, the consultants identified a range of key strategic recommendations which would assist the future development and growth of the audio-visual sector in Ireland.

The consultants concluded that with the implementation of their policy recommendations, Ireland’s film, television and animation sector could in a period of five years, double employment to over 24,000 full-time equivalents and a gross value added of nearly €1.4 billion.

Speaking at the Irish Film Institute Minister Madigan said “Today we start building on the success of the Irish audio-visual industry which has reached across the world.  This year we had Nora Twomey’s The Breadwinner, produced by Cartoon Saloon – an amazing Irish company with global reach – building on a strong run of successes at the Oscars and Cannes in recent years with films such as Room and The Lobster.  We are also an attractive location for international productions – in recent years Star Wars has brought a new audience to the delights of our west coast.

“Ireland has the creative talent, the storytelling and literary history, international credibility, geographic location and incentive structures to be a global leader, to tell compelling Irish and universal stories on screen, and to grow and sustain a vibrant creative audio-visual sector. Our Irish cultural heritage introduces Ireland on the world stage and allows us to express our national identity. Film in particular offers us a way to do that in very impactful way.

Both the Audio-visual Action Plan and the Olsberg Report are available here.