Jess Murphy A Role Model for her Industry 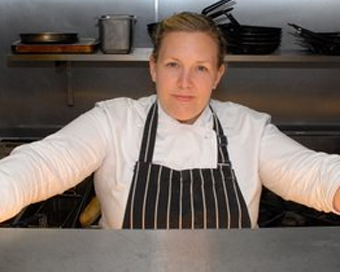 Award-winning chef Jess Murphy is now at the peak of the profession she wanted to join since she was just seven years old – but she says, it’s an industry where you have to be a ‘tough cookie’ to succeed!

The 39-year-old co-owner and co-founder of the acclaimed Kai Restaurant in Galway has been in the cooking industry since she left school at 16. She’s worked all over the world, from New Zealand, Australia to  the UK and Ireland. It’s no profession for wilting violets she acknowledges – but, she adds, on the upside, commercial kitchens are much more civilised places than they used to be.

Jess, who arrived in Ireland in 2005, spent a year working in Kevin Thornton’s restaurant on St Stephen’s Green as well as at  a number of well-known Galway eateries before launching her own restaurant in 2011 – and winning a national award in the form of the Best Chef accolade at the recent Irish Restaurant Awards. The judges clearly warmed to the New Zealander’s philosophy of sourcing high-quality, fresh, organic produce from local suppliers to create daily menus which they felt, were “bursting” with flavour, texture and colour.

Winning a top prize like this is a major boost for any restaurateur. And it’s a closely fought competition – in all, more than 90,000 online nominations were received for Irish restaurants and hospitality businesses this year. Awards were presented under 21 categories which included all areas of the sector including a new category for 2018, Best ‘Free From.’

Being a chef is a demanding career Jess acknowledges, adding however: “if you’re doing something you really love it’s great!” “I knew I wanted to be a chef since I was about seven. I always knew what I wanted to do in life; I saw the importance of people making food, and I loved the expression on peoples’ faces if you gave someone a Tupperware container of homemade cake! “Food is very much a bonding experience.”

However, she warns, to be successful in the food industry you have to be “a tough cookie”:
“When I first started out, the way Gordon Ramsay and Marco Pierre White behaved was the norm,” she recalls. The Head Chef was God, she says – and that was the norm in any kitchen environment no matter where in the world you were working! “That was the status quo. It could be a bit rough! Half the stuff that I experienced in kitchens years ago could be court case material now!” “In the old days things could get quite heated,” she puns, adding that it didn’t actually matter back then whether you were male or female: “Everyone got fairly rough handling!”

However, she adds, it’s a very different industry these days: “It has taken a 360 degree turn and things are a lot more civilised.” And nowhere is the work environment more civilised than in her own kitchen, she says proudly: “My kitchen is a gender-neutral place –it is 50-50 male/female and I consciously maintain that because an all-male or all-female team is not as effective as a 50-50 one so since I established Kai it has been 50-50!”

On top of that, she says, she and her co-partner, her husband David, offer their employees a 40-hour week, a living wage – and respect! “I feel Kai is a good example of how businesses should be run!” However, she observes, there are some “small things” that being one of the country’s top female chefs is occasionally forced to contend with. Job-seekers carrying their CV, will routinely walk into Kai looking for work. Now and again, however, when a wannabe-employee sees Jess coming out of the kitchen to talk to them, they make a point of telling her that their CV is actually meant for eyes of the Head Chef: “They just assume that the Head Chef will be male,” she reports. But she doesn’t bother to get mad: “I just laugh and say that I’ll give the CV to him. I cannot be dealing with that kind of attitude; you have to pick your battles.”

Back in the early days at various ceremonies or awards presentations,  Jess would be ignored by people “because they presumed it was my husband, David (the co-founder of Kai and its restaurant manager), who was the chef. “It’s these little annoying things that can get in your way, but I just push through and I don’t take any nonsense,” she declares, adding that for the record: “My kitchen is completely different to the usual kitchen brigade.” True, she admits, when it comes to being a female chef, the industry is not an easy one to work in for women with children. Long hours are the norm– and of course, if you work in the restaurant sector, you will probably mostly work nights.

However, she declares: “It’s a great career! It lets you travel all over the world. I’ve travelled all my life, using my job to see the world and experience different cultures,” she recalls, adding that a big plus for ambitious young chefs with wander-lust is that they can fine-tune their personal cooking style as they  travel. To attract more young women into the industry, she says, it needs to put forward good role models: “We have to create role models. We have to have role models for young women, so we need to create opportunities for young women to see that the restaurant industry is a viable option as a career choice.”

Jess, who employs 24 people at her eatery, says “We have this industry; it’s a big industry. We work all the weird hours known to man. “I’d like to see realistic regulation in terms of working hours and work/life balance across the food industry. “In my own restaurant I’ve created my own working environment, one where respect for other employees is expected!”

Imagine not just finding your work both...

The high calibre of Irish entrepreneurs has...