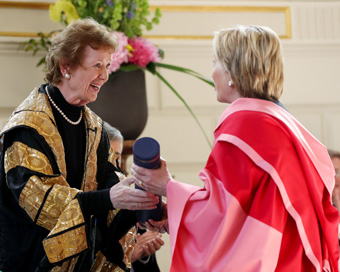 Trinity’s Public Orator, Anna Chahoud gave an oration in Latin on each of the candidates and they were then enrolled as honorary degree recipients. Trinity’s Provost, Dr Patrick Prendergast, and the Chancellor of the University, Mary Robinson presided on the dais.

The former US Secretary of State, Hillary Rodham Clinton, has been a longtime supporter of Ireland and especially the Peace Process in Northern Ireland.  Throughout her long political career she has devoted her life to advocacy and public service in her various roles as Secretary of State, Senator as well as the first female nominee for President of the United States from a major party. Adding to her many accolades she was awarded a Doctor in Laws. Her vision and mission were captured in the Public Orator, Professor Anna Chahoud’s oration in her honour:

“Almost sixty-six million people have given her their vote of confidence, sharing her belief that a true democracy is a society in which everyone is equally valued as a human being, from infancy to old age, irrespective of gender, status or nationality; it is a society in which women have the power to effect a transformative change towards development, justice, and peace.”

Secretary Clinton was joined by another fellow American, Dr James Simons the renowned mathematician, entrepreneur and philanthropist who has embodied scientific excellence throughout his career. He was conferred with a Doctor in Science.  Another pioneering role model and also a graduate of Trinity, Paul Drechsler, was conferred with a Doctor in Laws.  He has been previously honoured with a CBE for services to industry and is now Chairman of the longest established shipping line in Britain, the Bibby Line Group. Dr Tony Scott, who has made an enormous contribution to science education in Ireland was conferred with a Doctor in Education. He co-founded the Young Scientist exhibition in 1963 and has been actively involved in its organisation for more than 50 years.

For her significant contribution to the history of architecture, Ann Rowan, who served as Archivist in the Irish Architectural Archive for more than 30 years, was conferred with a Master in Letters. She single-handedly initiated and completed the Dictionary of Irish Architects in 2009, which was an enormous accomplishment and produced one of the most valuable pieces of research in Irish archival history. The Public Orator described this transformative piece of work:

“It was in the Archive that she came upon the treasure left by the eminent architect Alfred Edwin Jones. She transformed, and enormously enlarged that wealth of material into a detailed, accurate, comprehensive biographical index of architects, builders and craftsmen, covering nearly fifty thousand buildings in our island. The Dictionary of Irish Architects 1720-1940 is not only immensely authoritative; it is a democratic masterpiece of Digital Humanities.”

Vhi recently published the first in a series...

Following the recent publication of this...