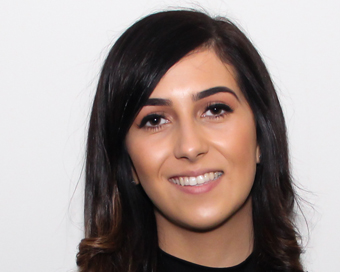 As one of Ireland’s youngest Chief Operations Officers, Junk Kouture’s Sara Ryan admits that she struggled to be taken seriously in her role at first. However, she has since emerged as a force to be reckoned with; her second year at the helm of Junk Kouture was a resounding success. The 2017/2018 recycled fashion competition had 1533 submissions from over 4000 students and the finals last month hosted by judges, including Louis Walsh and Pippa O’Connor, sold out Dublin’s 3Arena.

It’s been a mere four years since she began an internship at Junk Kouture. Having completed a degree in corporate law in NUI Galway, Sara had taken a year out, working in her local café while figuring out her next move. 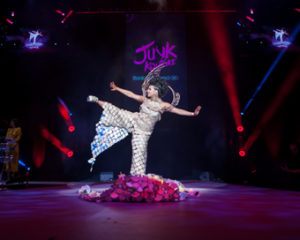 This year’s winner (2018) Moo was inspired by an oriental theme. Made with over 300 milk cartons, the piece was designed by Mary Brody and Isabelle Clarke.

The Junk Kouture role appealed to her; while Sara says she wasn’t artistic at school, she says she does have a creative mind and adores fashion.

Sara was one of a team of four, which included co-founders, Elizabeth Curran and Troy Armour. It was a steep learning curve for the 20-year-old, who quickly adapted to her role and a year later when the Operations Manager left; she was offered his position.

Another year on and Elizabeth Curran was taking a step back to spend time with her new baby, leaving her role as head of operations open.

When Sara was offered the position – she had been working at the company less than two years at that point – she was reluctant to accept. However, Troy insisted that she was up to the challenge.

“It was mad,” she says of the time. “I had a week to plan a launch and then it was into the events and production.”

At age 22, leading the Junk Kouture team and working with members of Bank of Ireland’s segment team and other professionals in production and PR teams, she felt a need to prove herself in that “incredibly difficult” first year. She felt that people were thinking “she’s so young, why are we dealing with her?”

She resorted to “ridiculous” tactics such as copying in her CEO on emails to ensure she would get a response. However, Troy assured her that when she had one year under her belt, “I guarantee everyone’s perception of you will change.”

She acknowledges that it’s not typical for someone who is 23 to be in such a “serious” job. “Most of my friends are still in college or travelling, but I wouldn’t change it for the world.”

And now with two events behind her, she feels like she’s finally being accepted on merit.

The competition, with the tagline “Reuse, Recycle, Refashion” where secondary school students create wearable fashion ensembles from the contents of their recycling bin, began as an event with 100 participants at a hotel in Buncrana, Co Donegal in 2009. It has since evolved into a nationwide competition with more than half of secondary schools on the island of Ireland taking part.

Junk Kouture designs have been showcased at the Cannes Film Festival and on the red carpet at film premieres.

Sara’s brief is extensive and she attributes her success to her “perfectionist” personality. Organisation comes naturally to her; she would have her notes organised weeks in advance of college exams. And as the “middle person” between the PR company, production teams, Bank of Ireland and the venue, Sara says good organisational skills are crucial to link everything together.

Sara has bold ambitions for Junk Kouture. While the competition expanded into Scotland in 2015, with the regional event held jointly with Northern Ireland this year, Sara hopes to expand across the UK.

She doesn’t believe gender is an issue with her role, as Junk Kouture tends to be female-dominated, although the previous year’s winner was male; Mariusz Malon took the top prize with his design Enigmatic.

Sara was invited to speak at an event recently at Microsoft’s offices in Dublin, where she says she was trying to convince her young audience that you have to merge creative thinking with STEM subjects. Without art and creative thinking technology wouldn’t exist, she says. 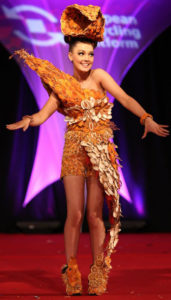 Katie Brill wears a dress made from dried orange peels. The creation by Katie and her schoolmates Emily Henshaw and Anna Keegan from Our Lady’s Bower, Athlone, reached the finals of the 2013 competition and was showcased at the London film premiere of The Hobbit.

Now in its eighth year, a combination of technical know-how with creative thinking is what Sara believes is crucial to the success of the competition.

There can be a perception that for Junk Kouture that the designs are made of “random rubbish, that it’s just crisp packets or paper bags thrown together. But it’s so much more than that,” Sara says.

Citing the example of a previous finalist which was a dress made from orange peel, she said the creator of the garment researched a 1600s process used by tanneries preserving leather and applied the same principles to their design.

“Junk Kouture is not just about design and this big fancy competition and performing in the 3Arena. It’s getting participants to really be creative and think outside the box. To see that what they’re doing can actually affect change in the bigger picture.”

Sara says that people tell her that she’s such a great role model. “I say if you have your head screwed on and you want to do something different you can achieve it.”

Her inspiration comes from the participants in the competition. “I don’t think I’d be as successful as I am now without the kids. I think if they can do this at 16 then I can do this.”

JUST eight of the 24 finalists in this...