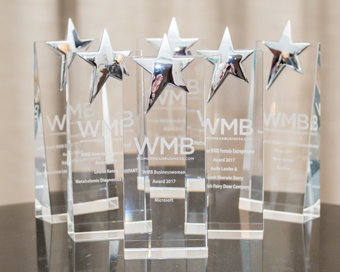 WMB is getting ready for the launch of its annual business awards at the beginning of next month. Winning a business award can bring many benefits to a company or a career in terms of recognition, media coverage, and the potential to gain new business.

When the award is a prestigious one, the endorsement from business leaders and experts is often a catalyst in the winner’s career, propelling them forward to achieve further recognition and success.

Evelyn O’Toole was the recipient of the 2016 WMB Businesswoman Award. The scientist and entrepreneur, who founded Complete Lab Solutions (CLS) in 1994, went on to win the EY Industry Entrepreneur of the Year in 2017 – one of only a handful of women to do so.

Following their win of the Matheson WMB Female Entrepreneur Award 2017, Irish Fairy Door founders Aoife Lawler, and Niamh Sherwin-Barry went on to scoop the top prize in the Emerging category of EY Entrepreneur of the Year. They also subsequently won the Image Business Woman of the Year.

The recognition by WMB and EY came at an opportune time for the Irish Fairy Door founders giving them a much-needed boost. Last year [2017] was a tough one for the company. Aoife says: “We battled to the point of ‘is this worth it lads?’. The awards “gave us a bit of a pat on the back when we needed it.”

She admits that they did wonder at the time if the effort put into the awards applications would have any benefit in the long run. “I know I’m speaking for a lot of women in business. We do everything; we are superstars. So when it comes to sitting down and using that precious brainpower to apply for something that you don’t know will make a difference in the grand scheme of things, you do wonder if it’s worth it.”

However, they say that the awards have opened some “serious doors” for them and allowed them to reach a level of professionalism they wouldn’t have otherwise.

Annie and Kate Madden of FenuHealth have enjoyed great success and exposure early in their careers, winning multiple awards for their business while still in school.

In a previous interview with WMB, the Maddens said that winning the 2017 Sodexo WMB Female Newcomer Award helped grow awareness of their brand. As well as the media coverage, social media activity on the day of the WMB awards alone brought them, seven new customers. And at a 92% re-order rate, they say that business is significant.

The application process itself can be an enlightening experience, which can help entrepreneurs to highlight progress made and to recognise their company’s strengths and weaknesses.

Lisa and Vanessa Creaven of Spotlight Whitening were finalists in the same award category as FenuHealth. Lisa confirms that there is “huge credibility” in being considered for an award and to being a finalist. The boost to the company’s profile helps it to stand out from competitors. “It gives you exposure to a target market that may not have heard of your product before.”

She acknowledges that the time and effort taken to complete the application form was “a great opportunity to reflect on how far you have come.”

Even if the application doesn’t lead to a win, the research conducted need not be in vain. The details can be used in further awards applications and for marketing, business planning and investor submissions. In fact, it is not unusual for a finalist to reapply a subsequent year and raise the winning trophy.

Having the opportunity to network with other successful entrepreneurs and businesswomen is a great way to learn and share new ideas, Lisa Creaven says. “Meeting individuals at these events usually leads to follow-up advice or support. Anyone trying to run their own business appreciates how hard it can be, so they’re willing to lend a hand.”

An award win can be invaluable for a charity or social enterprise which doesn’t have a big marketing budget, helping it to get media coverage and to build awareness.

‘I Wish’ is a social enterprise set up to encourage the participation of young women in STEM. Winning the WMB award gave ‘I Wish’ recognition and “that bit of confidence in what we were doing,” Caroline says. “It shone a national spotlight on the issue of girls in STEM and encouraged us to keep going.”

Caroline and her colleagues made some valuable new connections at the WMB awards. She says that networking on the day helped her to talk about ‘I Wish’ and that many of the women she spoke to subsequently became involved with the ‘I Wish’ programme.

If you’d like to receive information about the WMB Awards process, you can subscribe to our ezine here>>

New research conducted by EY among more than...

Senator Ivana Bacik is optimistic about the...