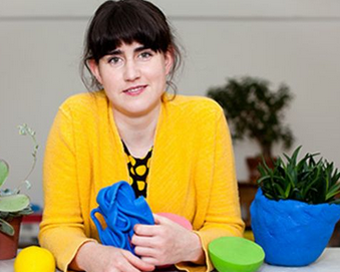 Kilkenny native, Jane Ní Dhulchaointigh, founder and CEO of FormFormForm, has been shortlisted as finalist for this year’s European Inventor Awards 2018, an annual prize for innovation awarded by the European Patent Office (EPO). Ní Dhulchaointigh and her team will compete in the category “Small and medium-sized enterprises”.

The award consists of four additional categories: Research, Industry, Non-EPO member states and Lifetime achievement. The winner of each category, as well as a publicly voted “Popular Prize”, will be announced at a ceremony in Paris on 7th June.

Ní Dhulchaointigh and her team have been selected for their creation of Sugru, the world’s first mouldable glue, which has the adhesive qualities of superglue. Used to repair everyday household items, Sugru adheres to most materials, including metal, glass, and fabric and once set, remains strong, flexible, waterproof and able to withstand high and low temperatures. It can also bear weights up to two kilogrammes and is available in a variety of colours. Among its wide range of uses, it can be fashioned into useful household items such as hooks for kitchen utensils, or used to customise switches and buttons on cameras and mobile phones.

Ní Dhulchaointigh’s idea of a mouldable, rubberlike glue designed with the do-it-yourself user in mind was entirely new to the adhesive industry, and its originality required legal protection. The inventor acknowledges that a patent “was critical to making the whole project work” because “most products like adhesives are developed by huge corporations” and it was therefore important for her to obtain the same level of protection as that available to industry. She also emphasizes that the patent was “the only way to raise the finance that would be needed to develop the invention.”

As advocates of repairing over replacing, the Irishwoman and her company see themselves as “a business on a mission” and part of a larger global repair movement trying to reduce waste and address environmental challenges by fixing everything from desk lamps to cars. It is estimated that Sugru has 2.5 million users worldwide, including a global online community of people that share their experiments and experiences with the product. This online community which spans 175 countries, has mended and customised more than 15 million objects, including a camera sent into space by schoolchildren and a prosthetic foot for a chicken.

The inventor’s company, FormFormForm recently launched a new “family-safe, skin-friendly” version of Sugru that children as young as eight can safely use by themselves. The company expects the new product, a recent winner of an Edison Award for Product Innovation 2018, to experience growth of approximately 50% in 2018 and double the brand’s retail presence by the end of the year. Given the uniqueness of ní Dhulchaointigh’s invention, the glue does not easily fall into a specific product category. The market for adhesives and sealants, in which Sugru has essentially created an entirely new sub-sector, is forecast to grow globally from €42.7 billion in 2016 to €54.7 billion by 2021.