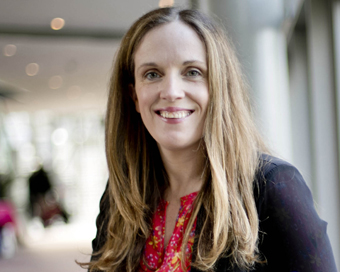 Creating award-winning technology which gives cinema audiences online access to the box-office and provides movie distributors with crucial marketing data, is not an obvious career choice for someone with a background in criminology and human rights. But it’s worked for Catherine Downes, a co-founder of dynamic Dublin tech company, Usheru, which recently scooped the 2018 Dublin City Enterprise Award.

Usheru, which currently employs four people, confidently expects to have more than trebled its workforce by the end of the year and is now raising funds to drive plans to penetrate markets in Europe and the US. The company connects the film website usheru.com to the existing point of sale systems of cinemas, allowing consumers to book tickets very easily. It also connects film marketing to the box office and is creating a ‘direct-to-consumer future’ for film distributors.  Not bad for a firm which launched on the market here in January 2015 and which enjoyed a London launch the following April.

Catherine Downes, earned a Master’s Degree in Criminology and Human Rights in Trinity College before working in a number of roles, including sales and marketing with tech giant Google before taking the leap into the world of entrepreneurship with fellow Usheru co-founders Oliver Fegan and Andreas Macias: “We had funding from the British Film Institute to look at the connection between audience and the cinema, with the ultimate goal of filling capacity in cinemas,” recalls Dublin-born Downes, now the firm’s Operational and Marketing lead.  The trio quickly came up with a solution – a website, usheru.com which provides details of films in local cinemas, and an accompanying app which allows cinema-goers to book seats online. That was in early 2015, but by the end of the following year, the company had already expanded operations: “We were approached by Universal Pictures to put a Book Now button on its online advertising so that it could sell tickets directly to the consumer.” “Our solution connected online advertising of a film produced by a company like Universal Pictures to the cinema box office.  “The innovation in this is that we help them to maximise the effectiveness of their advertising,” she says, adding that the fledgling firm is currently working with a wide and rapidly increasing range of film distributors including Wild Card Distributors in Ireland, Dogwoof Pictures in London and the European arm of US mega company, Universal Pictures.

“We’re still quite a small company with a total of four employees, but we’re raising funds at the moment to grow the business so that we can sell our product into Europe and the US.  “We want to move into a number of European markets over the coming two years,” she says: “We are applying the technology in a consumer way through the app and usheru.com and also through the commercial route as a solution for film distributers to measure advertising and sell tickets. Our strategic focus is growth for the business-to-business product.”

Winning the award says Catherine, brought very satisfactory recognition for the team, and while the top prize of €5,000, was a very welcome support, the biggest bonus, she explains, was the validation the company received from the judges, comprised of senior business advisors and experienced mentors, along with the gratifying recognition for the hard work of the team. Usheru won the hotly-contested top award from a highly competitive shortlist of firms which included Fifty Three Six Media, a digital strategy agency for sport, Strata Project Solutions construction planning and scheduling services, Radii e-learning, mobile and social software creators and Clinishift app which connects clinical staff and hospitals in real-time.

Usheru, which aims to grow its workforce to 13 by the end of this year, now goes forward to represent the Local Enterprise Office, Dublin City, at the National Enterprise Awards, which celebrates its 20th anniversary on May 24th. The fledgling firm has been described as a “success story” by Greg Swift, Head of Enterprise and  Economic Development with Local Enterprise Office Dublin City who observed that the judges were particularly impressed by the expertise within the team, its passion and the philosophy the company applied to their business.  “Usheru is building a successful and sustainable business, while delivering customer service solutions for other businesses – cinemas, festivals and film distributors.  “They are already active in the Irish and UK markets and are currently exploring additional markets.”  In the meantime, it’s onwards and upwards, as Catherine explains: “We’re working towards allowing film distributors to connect directly with their audience and bring data to allow the distribute more effective decision-making. “We let them see where people are buying tickets and which advertising is working, so we’re giving them an overview of who their audience is, and what the best marketing channels are in terms of  attracting these audiences.”

Have you ever been to a workshop where...

As one of Ireland’s youngest Chief...