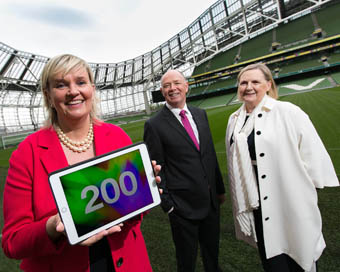 The 30% Club is a voluntary movement of international companies which are committed to better gender balance at all levels of business.  Comprising of CEOs and Chairs, the Group aims to achieve 30% female representation in senior management by 2020 through collaborative, business-led effort.

Research shows that while 48% of junior management roles in Ireland are held by women, less than one third of executive directors are female.  Traditionally, industries involved in Science, Technology, Engineering and Maths (STEM) are especially challenged when it comes to increasing the representation of women at executive and leadership levels.

The 30% Club Ireland has announced that PM Group has signed up as its 200th supporter.

Headquartered in Ireland, PM Group is an international project delivery company, which operates across Europe, the USA and Asia.  The company is a leader in the pharmaceutical, food, data centre and med-tech sectors.

Carol Andrews, Chair of the 30% Club Ireland and a Managing Director at BNY Mellon Ireland said: “The 30% Club believes that gender balance on boards and executive leadership not only encourages better leadership and governance, but further contributes to better all-round board performance, and ultimately increases corporate performance for both companies and their shareholders.  We are delighted to have PM Group on board and look forward to a fruitful relationship going forward.”

Pictured at the Aviva stadium, which PM Group project managed during its development are Carol Andrews, Chair of the 30% Club Ireland and Managing Director at BNY Mellon Ireland, Dave Murphy, CEO of PM Group, Brid Horan, Member of the Steering Committee of the 30% Club Ireland. (Picture by Shane O’Neill, SON Photographic)

Hopeful social entrepreneurs were joined by...