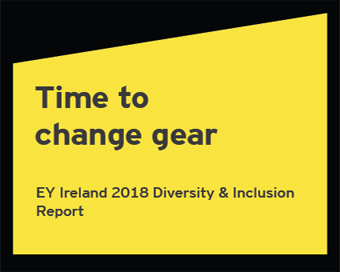 New research conducted by EY among more than 150 senior leaders across a range of indigenous, multinational and public sector organisations shows that the gender composition of both boards and senior management in Ireland has not notably changed in the last year, with 26% women on boards (v 24% in 2017), and 32% representation in senior management (vs. 33% in 2017).

The report was published this morning (Wednesday 24th April, 2018) at the EY Diversity & Inclusion InMotion Summit held in the Mansion House, Dublin, where Ireland’s leading experts in Diversity & Inclusion gathered. Speakers at the event included Vice Admiral Mark Mellett, Chief of Staff of the Irish Defence Forces; Dr. Orlaigh Quinn, Secretary General of the Department of Business, Enterprise and Innovation; and Her Excellency Anne Anderson, former Ambassador of Ireland to the United States, UN, EU, France, and Monaco.

The report shows that investment in D&I is increasing, with significant changes versus last year. However, investment appears to be lacking in strategy, data analytics and diagnostic assessment:

Investment tends to be focused on events (77%) and sponsorship (42%)

Aside from the areas of gender and nationality, the report suggests that Irish businesses are largely in the dark when it comes to the composition of their organisations more broadly, which is unsurprising in light of limited investment:

Organisations that are investing in D&I report noteworthy impacts:

“The correlation between investment in D&I and business impacts is undeniable. Without investment in attracting diverse talent, across age, gender, ability and background, little is likely to change, and issues that prevail today will remain in years to come. An organisation’s culture is one of the most difficult things to change. With younger employees, particularly Millennials, increasingly looking to workplaces that stand for more than profit, the potential impact of D&I in this regard is remarkable. D&I should form a cornerstone of any talent strategy, which is crucial in today’s business environment, where talent shortages are really beginning to bite. Businesses can’t afford to rest on their laurels by overlooking an asset as crucial as talent,” Olivia McEvoy concluded.

Recent female-led movements such as #MeToo...

WMB is getting ready for the launch of its...