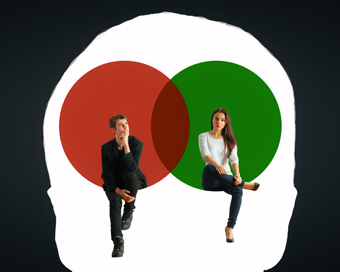 Since the pop psychology book ‘Men Are From Mars, Women Are From Venus’ was published in the 1990s, the debate around the differences between the genders has continued unabated.

The term ‘gender intelligence’ was coined by world-renowned expert on gender, diversity and inclusive leadership, Barbara Annis (CEO of Gender Intelligence Group) to describe the understanding and appreciation of the differences between men and women from biological and cultural perspectives.

However closer to home, psychologist and gender diversity expert, Dr Maureen Gaffney spoke more recently about how important gender intelligence is to understand the variations between the genders, especially in the workplace.

Neuroscientists have identified around 100 differences between the male and female brains, Dr. Gaffney revealed on Newstalk’s Hard Shoulder in the run up to International Women’s Day [last month]: “Gender intelligence is really about understanding these differences because they certainly contribute to many of the observed differences that we see between men and women and how they interact with each other, how they interact with their own gender and the opposite gender.”

Much of the misinterpretations and stress that can enter into male-female relationships, both personal and professional, are because of failures to understand each other, she went on to explain. Behaviours may be seen as “bad” or “annoying”, but are often due to the different ways men and women have of seeing the world and organising themselves.

Gender differences are apparent in the workplace and significantly in the way men and women make decisions. Males for example are mostly concerned with status and women with connectedness. This is down to how their brains are wired ­– the brain gender spectrum is very wide, with most women wired towards one end, and most men are wired towards the other. Men are more “action-orientated”, and that’s because their brains are wired from front to back. When they have a thought the wiring brings them straight down to the brain’s action centres. That’s why when women are talking to men about a concern, the very first question a man will ask is ‘what are you going to do about it?’ or ‘what do you want me to do about it?’”

In contrast when a woman is faced with a situation requiring a decision she goes over all of the implications and nuances involved. So while men make decisions quickly, women take much longer. The problem then is that this male “decisiveness” is typically seen as a strength in the workplace, Dr Gaffney revealed.

Barbara Annis of Gender Intelligence Group also shares some interesting thoughts on this fascinating subject matter. As co-author of ‘Results at the Top: Using Gender Intelligence to Create Breakthrough Growth (Wiley, 2017)’, her book on gender roles in the workplace suggests that men prefer swiftness over tact, while women consider a long-term contextual approach.

Within the pages, up-to-date viewpoints don’t confuse ‘equal’ with ‘same’ and go in-depth into the scientific differences between men and women that can complement each other to produce higher performing teams. Along with neurological variances, there are societal behaviours men and women need to recognise and substitute with more productive and advantageous ones.

Acknowledging that while there are individual differences, Dr. Gaffney highlighted in her radio interview that most male and female brains correspond to these gender differences and these are more pronounced in certain circumstances. For example, when someone is stressed the brain responds according to its “default”. Similarly, these responses are more exaggerated in all-male or all-female groups.

Always in high demand as an expert in leadership, emotional intelligence and change management, Dr. Gaffney went on to address an event co-hosted by RSM where she echoed her earlier comments that gender intelligence needs to be added to the portfolio of competencies necessary for individual and business success.

Ultimately a lack of understanding of gender differences is holding back “very necessary progress in gender equality”.

You can listen to Dr. Gaffney’s interview on Newstalk’s Hard Shoulder here>>

A programme to assist micro and small...

Irish entrepreneurs could get a huge cash...