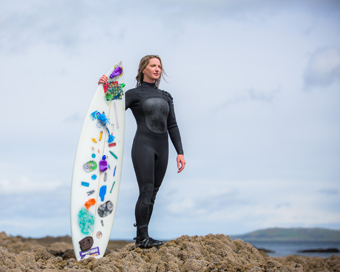 She was named after a famous surf break on Ireland’s wild north-west coast. It’s little wonder that Easkey Britton went on to become a five-time national surfing champion.

Describing her attachment to the sea as “akin to a constant love affair,” during her childhood in Rossnowlagh, Co Donegal, the coastline was the perfect playground and an integral part of daily life. Even the shortcut to school was by the beach “a constant check-in with the sea and learning all of its moods and weather patterns.”

Easkey stood on her first surfboard at the age of four, and she says surfing and the sea have shaped who she is. “It’s been an amazing driving force in my life. I think that’s an incredible thing for a young woman”. With two decades of competitive surfing behind her, Easkey has always seen competitive surfing as a means to explore and travel and to experience new places and people.

Eight years ago, an opportunity arose to introduce surfing to a remote region of the world through a travel writer ‘friend of a friend’ who was part of a group planning to visit Iran. When plans for the original group members fell through, Easkey forged ahead with French filmmaker Marion Poizeau; the two women formed a close bond as a result of the positive experience.

On a return trip three years later, Marion with camera in hand and Easkey equipped with a customised surfing hijab, joined forces with Iranian sportswomen, snowboarder Mona Seraji, and swimmer Shalha Yasini to shoot a film. It was incredible to meet other women “who were pushing their own barriers and doing what they love and in a totally different cultural context”, she recall. The subsequent award winning documentary – Into The Sea – was instrumental in challenging the stereotypes of women in that part of the world, Easkey says. “Surfing was a way of celebrating the beauty of the experiences of encounters and connections in a place that often has a misunderstood or bad reputation.”

Inspired by this experience, Easkey co-founded Waves of Freedom, an initiative which uses surfing as a medium to creating positive social impact and empowerment for marginalised communities worldwide. These days Easkey’s main focus is on the therapeutic and restorative benefits of surfing and water on human health.

As a research fellow at NUI Galway, she co-leads a multi-disciplinary team with ecologist Caitriona Carlin, working on the Nature and Environment to Attain and Restore (NEAR) Health Project. This three-year project, funded by the Environmental Protection Agency and the HSE, is exploring the link between human health and the environment and the interactions that we have with the outdoors and nature.

Easkey is fascinated with the concept of ‘Blue Mindfulness’; inspired by the book Blue Mind, it explores the idea that there’s a psychological effect on us when we’re on, near or in water.

“The idea that as human beings we have this innate connection to water. Mindfulness is that absolute presence in the moment. And so surfing is this active form of mindfulness of our full bodies which I think translates into other areas of life by teaching us that the moment of insight and connection can occur when we’re completely immersed in an activity.”

As an advocate of Clean Coasts, Easkey highlights one of the objectives of the NEAR project which is to create an emotional connection that drives people to a greater sense of awareness and responsibility and a desire to act. Referring to what’s happening now with ocean plastic and marine litter, she reflects: “all of our human behaviours are being mirrored back at us. Every choice we’ve made, every decision, it doesn’t disappear.”

Alongside her research, she runs retreats and workshops on leadership for women and creative storytelling. Easkey believes that most environmental problems are not problems with the environment, they are issues at a social level. And storytelling is key to solving those issues.

It’s an interesting idea for a business...

Have you ever been to a workshop where...