THEYA Expands at House of Fraser 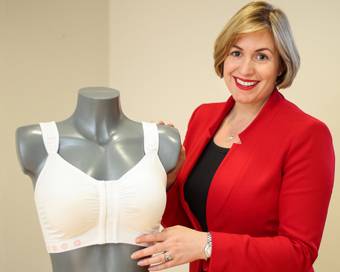 THEYA Healthcare, the award winning Irish company that has built its name by listening to women, announced that its revolutionary post-operative lingerie range is being rolled out to selected House of Fraser Stores across Ireland and the UK.

“We’re thrilled that the range has had such a great response in House of Fraser’s online store and that they have decided to roll it out to selected high street stores as well,” said THEYA Healthcare CEO, Ciara Donlon. “We speak to women undergoing treatment for cancer on a daily basis and we know that it’s important to many of them to be able to access the underwear they need in mainstream stores, not just from specialist retailers. We feel that what House of Fraser are doing with our range is an important step in helping to lift taboos about breast cancer and mastectomy.”

The brand launched online with House of Fraser 18 months ago and having proved popular with customers is now also hitting shop floors in Darlington, Dundrum, Exeter, Leeds, Maidstone and Nottingham.

Headquartered at NovaUCD, the Centre for New Ventures and Entrepreneurs at University College Dublin, THEYA Healthcare is in the middle of a Series A Funding Round in order to accelerate scaling. Jenny Elisha, Buyer Lingerie & Hosiery, House of Fraser said, “The response to the THEYA Healthcare range in our online store has been fantastic and we’re convinced when ladies have the opportunity to feel the fabric and try on the garments in person, they’ll prove even more popular, we’re very excited to see them in store.”

Usheru, a tech company from Dublin has won...