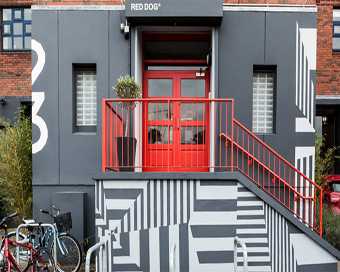 Creative agency Red Dog is celebrating on the double, after its success at two international awards ceremonies.

The agency was awarded silver at the Transform Awards Europe, which took place in London.  The awards are amongst the most prestigious for the design industry, with a focus on “recognising excellence and rewarding innovation in branding”.

Red Dog’s success in London follows the agency’s achievements in the USA: the company – which has offices in both Dublin and New York – received an honourable mention at the PR News CSR and Non-Profit Awards last week, with the ceremony taking place at the National Press Club in Washington DC.

Red Dog’s entry for both awards focused on a significant rebrand for Jhpiego, a US charity that works globally in the area of maternal healthcare.

Commenting Mary Doherty, Managing Director of Red Dog, said: “It has been a whirlwind couple of weeks for Red Dog.  We had the US awards ceremony last week and the Transform Awards in London last night – and, in between, we did a major presentation at Offset in Dublin.

“As a company that is proudly rooted in Ireland, we’re delighted to be gaining traction internationally.  We opened our New York office in 2012, and we have steadily built up a strong base of US and global clients, with a focus on organisations in the not-for-profit sector.”

“I set up Red Dog the day after I graduated from NCAD in 1993,” said Mary Doherty, who is originally from Buncrana in Co. Donegal.

“The business was built from nothing: in the early days, our growth was fuelled by good design and a good bit of sassiness.  We weren’t afraid of going for projects that were maybe too big for us – at the start, our naivety was helpful.

“Little by little, we settled into being a good, solid design agency with a lot to offer. We also took the decision to open a New York office in 2012 – as a response to the market here.

“We have a hugely committed team: the average length of service in Red Dog is 12 years.  We were on a high after the weekend, having presented at Offset for the first time.  To top that off with the success in London last night and our commendation in Washington last week – it’s really making our 25th year in business very memorable.”

Step up to the Plato!

Plato Dublin is an 18 Month Business...