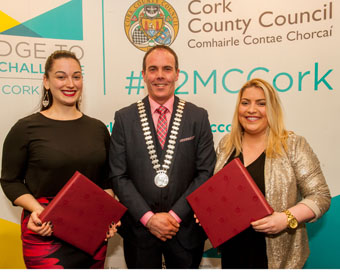 Ireland’s top twelve entrepreneurs in the Life Sciences, Medical Technology and Digital Health areas have been announced at the closing ceremony of phase two of Bridge to MassChallenge Cork, the Cork Boot Camp.

These ambitious businesspeople, are now set to accelerate to the next round of the international competition — a week-long all expenses paid boot camp in Boston next month. From this, the top two companies will be selected to go forward to second round judging for one of MassChallenge’s international accelerators. Through the leadership of Cork County Council and MassChallenge’s dedication to supporting the growth of the ecosystem in Cork, they saw the talent in the cohort and increased the number of startups selected to visit Boston to twelve from the originally stated ten.

Applications for Bridge to MassChallenge Cork opened last November and were evaluated by a panel of MassChallenge experts who selected twenty ambitious start-ups in the Life Sciences, Medical Technology and/or Digital Health Sector. These start-ups displayed plans to scale up and connect internationally and were recently given the opportunity to participate in a three-day Cork boot camp.

Mentoring from industry experts featured prominently throughout the entire event. Two mentors of note included Brittany McDonough of MassChallenge and Laura Hamilton of RxCelerate pictured here with with Mayor of Cork County, Cllr. Declan Hurley at the closing ceremony of the Bridge to MassChallenge Cork boot camp. Subsequently, the two ladies went off to Manhattan where they received awards from the oldest American newspaper in the USA (established in 1928) The Irish Echo, as being two of the Top 40 under 40 – this prestigious award was sponsored by Tourism Ireland and The Irish Business Organization of New York Inc.

The Bridge to MassChallenge Cork boot camp concluded with an intensive competition to determine the top twelve start-ups to emerge from the boot camp. These twelve will now advance to a one-week all expenses paid intensive boot camp in Boston, next month. From this, the top two companies will be selected to go forward to second round judging for one of MassChallenge’s international accelerators.

For further information visit here>>  To follow the progress and to join in on the conversation online follow Bridge to MassChallenge Cork on Facebook\b2mcCork, Twitter @b2mcCork or LinkedIn. #B2MCCork.