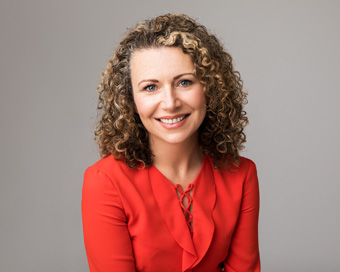 It’s an interesting idea for a business – mentor ambitious executives at critical career junctures which you found challenging during your personal journey through the corporate world.  And so far it’s proved to be a successful one for former corporate high-flier Mary Lou Nolan, who spent more than 20 years in the world of big business before launching out on her own last autumn.

Prior to setting up her new company, Cor Consulting Ltd, Mary Lou established and led the EMEA HQ for Intellectual Ventures, a global leader in Intellectual Property and Invention. Prior to that, she led Cisco’s Irish business through a doubling of revenues over a two-year period, which she credits to transforming the culture of the Irish operation.  Then, in June 2017, she grabbed an opportunity to exit a highly successful 20-plus-year corporate career:  “I’d been at Intellectual Ventures, where I set up and led the European Licensing team out of Dublin. IV invests in patents and patent portfolios and our job was to license those portfolios across Europe.  “Last June there was a change in the business and I took the opportunity to exit,” she recalls, adding that at that stage she’d presumed that after a break she would be returning to big business.

“I decided to take the summer off and spend it with my three kids. During that time I completed a course in coaching and mentoring. As part of earning the qualification you had to do a number of pro bono coaching and mentoring sessions with clients.”  She found it very fulfilling and really enjoyed it – plus, she learned, she was good at it: “ I got very good feedback!”

Last September, she decided to set up her own business, working with high-growth companies where excellence in leadership and execution is crucial.  Mary Lou’s role is to help executives develop confidence and build on their communication, conflict resolution, delegation and team development skills: “Whenever I reflect on my own career, the times I benefited most from coaching and mentoring were times of change, such as a reorganisation or a merger, or, for example if I was progressing to a people management or board leadership role.  “These can be challenging steps and this can be a time when you’ll experience a crisis of confidence – yet this is the time you have to be at your best!  “These were the times when I benefited from a coach or a mentor myself – I’ve worked in a lot of these roles, so I’m looking to work with people at these career junctures.”

Following a ‘chemistry session’ – to ensure the chemistry between Mary Lou and the client is positive – she works with him or her to identify individual personality traits, blind spots and behaviours: “You’re basically trying to bring awareness to people about how they might behave under pressure, and how they might be perceived by their team, both on a day-to-day basis and when they’re under pressure,” she explains.  Once she and the client have arrived at a mutual understanding of areas that need development, they begin to address them.

“It can be small things –sometimes when people are stressed they can stop communicating with their team, for example. “If business results are poor, the pressure is turned up and a manager can become directive and abrupt, when what’s actually required is to be more supportive and collaborative with his or her team.  “It’s not just about being ‘nice’; it’s about business results, and all the evidence shows that improved leadership behaviour and better communication has a direct impact on business results,” she explains pointing to her own experience when she took over leadership at CISCO Ireland as Country Manager in 2010. She spotted an opportunity, she recalls, to grow the business. Consistent communication with her workforce led to an improved culture and a strong bond of trust all around. Within two years the company had doubled its revenue – and this was between 2010 and 2012 at the height of the recession.

“Essentially what I do is help executives at all levels to improve their self-awareness of how their behaviour impacts directly on others in the business, both on their team, on their wider network of colleagues and on the business. “ So, for example if there’s a requirement for improved communication regarding specific requirements from a client’s team, Mary Lou shares effective suggestions and tools with which the executive can address this need.  “These tools will be trialled in their working environment and their impact is assessed at follow-up sessions with me.”

Typically an engagement with Cor Consulting would run once monthly for six months or more.  Half-way through the programme she and the client sit down together to review and assess progress and the client’s commitment to the plan. “The executives are the ones who ultimately take the actions,” she explains.  “Every day is different and the sense of fulfilment when I get a breakthrough with a client is second to none. We could be working with a client and trying to help them understand why he or she behaves in a certain way and when I get that ‘Aha!’ moment it’s very fulfilling!”

So yes, Mary Lou has found a new passion: “I’m really enjoying this work; I was never good at predicting the future but I know wherever the path takes me I will always use my coaching and mentoring techniques to get the best from people,” she says, adding that it takes real courage for a client to effect change in how they manage their team and interact with colleagues: “The name of the company, Cor, is the Latin origin of the word courage. The reason I picked it is that it takes real courage to change and that’s what Cor is about – helping people go from good to great – I’ve seen the impact that positive leadership behaviours can have.”

Mary Lou believes in clear communication and consistency between what a leader says and what he or she actually does. It’s important for leaders to behave in a way that encourages trust and respect among team members, she emphasises: “Be a role model – behave in the way you want your team to behave, because they will copy you.”  Don’t focus solely on managing upwards, is her advice – always treat your own team as equally important as those above you. And last, but never least: “Don’t ever believe you’re the finished product or that you’ve reached a stage where you don’t need to learn anything else. Continuous learning and development should be the mantra for all leaders.”

One day, when Phyllis MacNamara was a...

She was named after a famous surf break on...