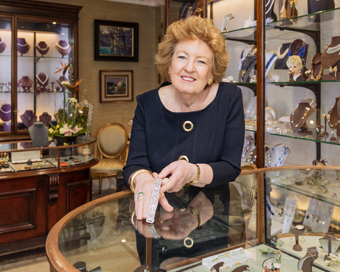 One day, when Phyllis MacNamara was a struggling young entrepreneur, she went to her bank manager to request an extension of her overdraft facility.  It was in the early 1970’s and his response was unhelpful to say the least:  “He said to me, ‘why aren’t you like other women and have coffee mornings? Why do you have to do this?’”

Phyllis, who recalls she was in her twenties at the time, says she didn’t get the overdraft extension.  “I was absolutely livid,” she says now.  She complained to her father, Jimmy Lydon, a successful businessman in Galway, who had always encouraged Phyllis in her endeavours.  “I thought my father would take my side,” she recalls now.  “Instead he gave me the best gift he’d ever give me!  “My father said “did I ever tell you it was easy?   “Either you can do it, Phyllis, or you can’t do it.  “If you can’t, go and find someone who can, and ask them to give you a job.  “If you can, stop moaning and get back to work.”  “I mopped up my tears and got back to work,” laughs the 67-year-old, now a successful jeweller with a renowned shop, Cobwebs, at Quay Lane in Galway.

The shop sells antique and vintage jewellery, fine diamonds and engagement rings as well as an eclectic mix of small antiques to clients all over the world, from movie star Barbara Streisand to Hollywood actress Jennifer Tilly.  “I was invited to appraise some of the Duchess of Windsor jewels. I tried on her sapphire bracelet, and yes I took a selfie,” muses Phyllis.

A career in business was always her ambition, she says – both her grandmother and her father were successful entrepreneurs

However, her long-anticipated preparations for a career in the world of business didn’t go smoothly.  In 1968, at the age of 16, Phyllis went to Trinity College to study business – but quickly found she hated it:  “My business class had 95 boys and 7 girls and I hated it!  “I hated the fact that I was expected to give up my femininity and I hated being surrounded by men,” she recalls, adding however, that one good thing came out of that business class – she met her husband Michael there. The the couple had 33 happy years together before he passed away 10 years ago.  The following year she switched her study programme to a degree in Fine Arts, English and Irish, and, after leaving Trinity, she completed a communications course in Radio Production.

She returned to Galway in 1972, planning to pick up a job with the newly launched Radio na Gaeltachta, but fate had other plans.  Her sister was establishing an antiques shop and Phyllis went in for a week to help her get started – and never left.  Her sister left shortly afterwards – she had a family to care for – and Phyllis realised she’d found her raison d’etre.

But being a young businesswoman in the Ireland of the 1970s was no bed of roses, as was driven home to her that day she went to her bank manager.  However, other than that, the chauvinism in the Irish business world never really got her down:  “Because of my relationship with my father I always felt I could do anything,” she recalls.  “He used to say he’d give me six eggs and I’d turn them into an empire.”  “I never thought that being a woman differentiated me in any way.”  The jewellery business is very much a man’s world, she acknowledges, but it never bothered her:  “I have always seen myself as running my own business and I never thought my gender had anything to do with it.  “I saw myself as the equal of any man in business and if any issue relating to gender came up I didn’t entertain it, not for one minute!  “I think women have a strong voice in business now,” she says, adding that although sexism didn’t interfere with her business life, she was aware of its existence.

Phyllis’ business life has had its ups and downs over the years, primarily because of her shop’s quirky location near the quaint Spanish Arch, which means she’s been flooded several times:  “The sea just crosses the road and comes in,” she says, recalling that the first time Cobwebs was flooded, about 30 years ago, her insurance company paid out about €33,000. However, Phyllis recalls, the pay-out didn’t come near what it actually cost to get the shop back up and running again ­– and afterwards, she couldn’t get insurance. “We had an horrific flood in 2013 or 2014, and when that happened we had to close the downstairs of the shop.”  The shop was so badly damaged that Phyllis put all the jewellery in Tupperware boxes, and flew to England where she visited all the high end antique jewellers, selling her wares, often at a substantial loss:  “My heart was pounding going into these shops. I had to swallow my pride and get the money in quickly so I sold a lot of jewellery at a loss, but it was a case of either do it or give up.  “I got money in. I had to do it or be ruined. I got the money to re-do the shop and we have good flood defences now,” she recalls, adding that the government’s announcement of €9 million into flood defences in Galway will be of significant benefit to her shop.

She has a passion for what she does, but she emphasises, it’s never been easy:  “What I do is not easy. You have to have a really strong personality for it.  People think you just get dressed up and go to work and sell beautiful jewellery all day; they’ve no idea how difficult it is. I often think of my dad saying ‘If it was easy, Phyllis, everyone’d be doing it!”

Despite the fact that she now has nearly half a century under her belt, she has no intention of retiring.. “I have a marvellous manager called Joe Hawksley, with whom I get on extremely well. We run the business together very well.”  Her guiding principle has, and always will be, quality – no matter how much the ever-evolving jewellery industry changes:  “There are a lot of  people making jewellery who have great stories and fantastic marketing campaigns but at the end of the day the product in your hand has to stand on its own, without the story and without the marketing.  “There is something absolutely wonderful about buying a piece of nature like a diamond that has been fashioned into a work of art that you can wear on your hand. The joy of it never leaves me.”

Gillian Doyle on 'Taking the...

It’s an interesting idea for a business...