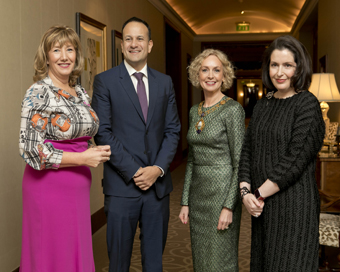 Vodafone Ireland CEO Anne O’Leary, has taken up the position of President of business group Dublin Chamber. The Cork-native officially took up the role at the Chamber’s recent AGM in the Intercontinental Hotel. She will hold the position for 12 months.

Anne has pinpointed a number key areas to focus on during 2018 which will improve Dublin as a place in which to do business and in which to live.

Speaking following the Dublin Chamber AGM, she said: “Against the backdrop of Dublin Chamber’s Vision for Dublin 2050 and the publication of the National Planning Framework, how can we prioritise the things that will futureproof Dublin and feed the quality of life ambitions of its citizens? I believe it will require a wider conversation, about the role the capital city plays in driving success for those outside the city and county boundaries.

Increasingly, we need to understand that Dublin doesn’t just belong to Dubliners: the capital city belongs to people from all over Ireland.”

Anne has also stated an intention to improve the diversity of attendees at Dublin Chamber’s networking events. She said: “During my Presidency, I will continue to promote the importance and value of diversity to Dublin Chamber and our members. I would like the Chamber to be a true reflection of the diversity of thought that now exists in Ireland.”

Dublin’s business community is being...

BIC is all the Buzz!