Gillian Doyle on ‘Taking the Leap of faith’ 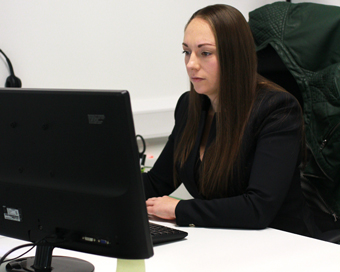 Breaking trends creates opportunities, believes Dr Gillian Doyle, Chief Executive of the insolvency software firm Cerebreon Technologies.  And no, she’s not actually referring to her company’s pioneering – and award-winning – work in the insolvency sector.  Doyle’s talking about the vast range of opportunities out there for women who are prepared to take the leap required to break into male-dominated sectors like analytics or software development, just as she did.

The award-winning Donegal firm, which Doyle founded two years ago with business partner, Kenneth Doherty, now her husband and the company’s Chief Operating Officer, creates specialised software for the UK insolvency sector.  “We build software to help companies which manage insolvency to do their job,” explains the 35-year-old specialist in predictive analytics, who forecasts the return on personal debt portfolios for some of the UKs largest banks. With a Ph.D. in Nanophysics she is also extremely well-versed in R&D and innovation. Doyle studied physics at university, then worked as an analyst and later became a developer, all of which, she observes, “were very male-dominated areas.”  “You should not perceive male-dominated as a negative thing,” says the Celbridge, Co Kildare native, who is living proof of this.  Just a week before her marriage to Doherty last December, the fledgling company won the InterTradeIreland award for Best Start Up.  The couple met as undergraduates in UCD in 2004, and, after graduating from UCD in 2011, Doyle moved to Belfast, where Kenneth Doherty was already working, as an R&D manager for a wave energy company – he had graduated from university with a PhD in Applied Mathematics a few years previously.  Doyle found a job in the insurance industry, and later worked as an analyst in the insolvency sector:  “I was basically predicting for banks and big credit companies the amount of money they could expect to get back from individuals who had become insolvent as a result of a variety of reasons ranging from financial mismanagement to illness,” she explains.  After being promoted to operations manager for three data entry teams, she had a brainwave – the idea was to replace the manual data entry function, which she felt was costly, time-consuming and labour intensive, plus she says, she “also felt the staff would have been better allocated to higher-value functions.”

At the end of January 2016, the couple set up Cerebreon Technologies in Donegal:  “We started by doing analytic work in a consultancy type role, and later began developing the technology which underpins Cerebreon,” she recalls, adding that in 2017 the company won the Intertrade Ireland Best Start up award – they got the news the week before their wedding.  The cash prize – €50,000 – enabled them to employ a fourth staff member, a junior developer, at the company.  “The process of winning the award was phenomenally useful to us because it put our business plan under the microscope for an investor-type audience,” she recalls.  Over the next four to six months, she says, Cerebreon Technologies will focus on attracting investors so that the company can accelerate growth and secure contracts.  “Our aim is to be a key producer of software to the insolvency industry within the next two years,” she says.  Since establishing the company, Doyle continues to work in a male-dominated sector – and now she’s getting some first-hand insights into why this is so:  “We recently advertised for two software development jobs, senior and junior. We had 35 applicants,” she recalls.  Only one of those applicants was female.  “Even though we are in a rural part of Donegal the point is still valid – I cannot employ women if women don’t apply!” The trend for fewer women in jobs like these could result more from an issue of confidence than a lack of opportunity, she believes, pointing to the fact that both the education and the jobs, are available:  “The statistics are there – men are happy to apply for a job even if they only have 40% of the required skills, but women won’t apply unless they can tick all of the boxes.”  In fact, observes Doyle, if you find you tick all of the boxes, you probably aren’t applying for the right job because you’re not being sufficiently challenged.  “I think women will be in the minority for a while in the tech space but that offers great opportunities for those willing to be different.  “Women need to change their attitudes and start applying whether it is for a promotion or for a job where extra education or training is required,” she urges:  “Take the leap of faith!”

From the age of four Helen McCarthy was...

One day, when Phyllis MacNamara was a...