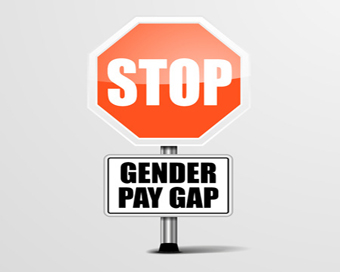 Expectations on women to shoulder the majority of the burden of caring for children and elderly relatives as well as unaffordable childcare costs are contributing significantly to the gender pay gap. This is according to a symposium held by the Department of Justice (DoJ) in Iveagh House, Dublin last month. Intended to raise awareness of the factors underpinning the gender pay gap, it sought to identify actions that can be taken to address the issue.

The findings of a public consultation were outlined in a document circulated on the day, which included 38 submissions from employers, unions, professional bodies and individuals found that caring responsibilities was the most significant cause of the gender pay gap; with 18 out of 38 (or 47%) agreeing. Almost one fifth (18%) blamed access and affordability of quality childcare for the gap.

In the media industry, there has been a series of revelations both at home and abroad, highlighting the gender pay gap. BBC’s Carrie Gracie resignation last month as China Editor, received significant coverage. Carrie cited a “secretive and illegal pay culture” at the Corporation. Having discovered that she earned significantly less than male international editors at BBC, she has moved back to the newsroom where she said she “expects to be paid equally”.

High-profile revelations such as this has served to highlight an inequality which research has shown exists across all industries. CSO figures released last October, revealed that the gap had actually increased by 2% to 14%.

Other reasons mooted at the symposium for pay disparity included occupational sectorial gender segregation; 37% of those who contributed to the document submissions said that roles seen as ‘male’, such as those in engineering and science were better paid than those seen as ‘female’ such as childcare and positions in the educational sector.

Almost a quarter of respondents (24%) saw a problem with a lack of women in senior positions. Additional causes were presented, including a disproportionate number of women in lower paid (34%) and part-time (21%) employment, non-transparency of pay structures and pay negotiations and in working arrangements that had precarious or zero hours contracts (3%).

A number of measures were put forward to tackle the gap. For instance, making gender pay reporting mandatory for employers, and introducing measures, similar to existing legislation in Scandinavian countries, to allow for family leave to be more evenly distributed in relation to caring responsibilities. In tackling the perception of gender-specific roles, it was proposed to target secondary school level through initiatives such as the promotion of STEM subjects for girls.

Commenting on the conference’s findings, Orla O’Connor, Director of the National Women’s Council of Ireland (NWCI) said that there are many factors, which directly contribute to the gender pay gap.

“Closing the gap is not as simple as saying that men and women who are doing the same job are paid differently.” She said that women are “less likely to be in highly paid senior positions or be promoted because they have taken time out of their careers to have children.” She believes equal treatment of parents will help to overcome these barriers. “Providing equal support to men and women to look after children, as well as other forms of unpaid caring roles, is one of the most effective policy levers in reducing the gender pay gap.”

Referring to the NWCI report ‘No Small Change: Closing The Gender Pay Gap’, it identified numerous actions to be taken to redress the balance.

Transparency around pay is crucially important. Citing the new requirement for companies in Iceland to report on pay, Orla added that the NWCI intends to monitor the Government’s progress in this issue. The Gender Pay Gap (Wage Transparency) Bill, introduced by Senator Ivana Bacik in 2017, is expected to put in place a system of reporting on gender pay differences for companies.

Proactive action is what’s needed if change is to happen according to Orla. “We believe that we have moved beyond the stage of soft measures, and if change is to be achieved in our lifetime, then we need strong commitments rooted in substantive laws and sanctions where necessary.”

Elsewhere, new research published by the 30% Club into gender diversity in the financial services in Ireland found a 50/50 split between men and women at entry level. However, the report ‘Making the Change Count: A Study of Women in Financial Services in Ireland’ found that just 13% of CEOs of the respondent organisations were women. This ‘staggering’ gap between women and men occupying senior executive roles in the sector, has promoted calls for the introduction of gender targets.

Carol Andrews, Managing Director of BNY Mellon, and Chair of Ireland 30% Club chapter says that it is only on the way up the career ladder that the gap appears. “As we move up the scale, a stark and significant gap widens between men and women, culminating in the headline figure of 89% men and 11% women at Chief Executive level.”

Her assertion is reflected in a recent UK study, which found that the pay gap widens with age. The Office for National Statistics study of private and public sectors found pay differences increased from 40 onwards, peaking between the ages of 50 and 59.

Carol acknowledges that the pace of change is “extremely slow, glacial even” despite “fairly significant focus” on gender and diversity issues. “Speaking from a financial services perspective, my industry, we need to continue to attract and retain more talented female professionals to our industry and also work to retain them and maximise their development opportunities to reach their full potential. Only then will we achieve meaningful and sustainable change.”

Fancy some Seaweed on the...

As we become more conscious of the origins...