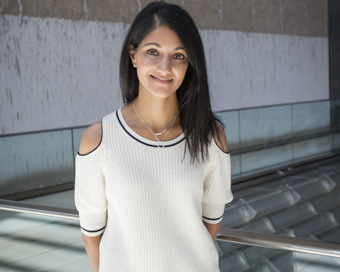 Beauty is a notoriously difficult industry to crack, but with solid backgrounds in family business, the Irish duo behind Pestle & Mortar seem to have discovered the trick. WMB spoke to Sonia Deasy, the Irish-Indian face – and brains -– of the brand.

Growing up in Co. Kildare, Sonia Deasy knew from a young age that she would never be looking for a job. One of six children of an Indian couple who moved to Ireland in the 1970s ­– preferring it to the UK because of the superior education system – she saw first hand the challenges and excitement of self-employment. Although she was persuaded to attend university, where she completed an arts degree, Sonia always knew her future was in business.

“My parents are Indian so there was never a question but we had to get a degree. We all have degrees. I chose arts so that I could go on and do the HDip if I had to, but I didn’t in the end. I would encourage that approach, you can’t take from the value of education.

“It was in-built in us from a young age, how to run a business, how to make money, the value of money, how retail works. You’re in charge of everything when you’re self-employed, you’re wearing all the hats at the same time and you learn very quickly how to do everything.”

Her father was an engineer by training but opened a shop in Newbridge where, according to Sonia, he was the first in Ireland to stock Clark’s Shoes. She watched, and gradually began to join in as he and her mother discussed the business over the kitchen table and at the age of 20, when he took a break from the business for a while, she took over. It was a steep learning curve, but she loved it.

“Growing up in a family business develops a mindset. A lot of people think ‘oh I’d love to be self employed’, but they don’t know about not getting a paycheque every week… I wouldn’t say it’s stressful, we enjoy it and that’s what we’re used to. It’s not like we are working and working to reach the next holiday – we’re happy in our day to day lives so we’re not trying to get away from it. It’s a way of life.”

The couple has five children and Deasy believes they are growing up, as she did, observing hard work at close range, but she values time spent at home too.

“The girls see me working equally as hard as their father. I have full time childcare, but I don’t work long hours – my husband works longer hours. If I want to stay late, I can, but I choose not to.”

She’s not sure – despite her own enthusiasm for it – whether she would advise her children to become self-employed.

“I’d make sure they get an education… I’m sure we will have a huge influence over them even though we try not to! Part of me says just go and get a job – being self-employed is hard and getting harder.”

The studio had its ups and downs during the recession and it was working on photo shoots with makeup artists that Deasy came up with the idea for Pestle & Mortar. Observing the skin problems of portrait subjects and how makeup artists would use hyaluronic serum to smooth and plump out skin, she hit upon the simple – but new – idea for a skincare brand that’s exactly what it says on the tin.

How Ciara Donlon got Hooked...

Ciara Donlon always knew she wanted to be...

An Evolving Career for Carmel