Fancy some Seaweed on the Side? 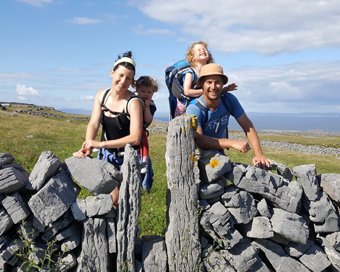 As we become more conscious of the origins of the food we eat, many people are rediscovering the more traditional foods which adorned the tables of yesteryear. Edible seaweed has experienced a surge in popularity in more recent years as the push towards sustainability continues, and awareness grows about its potential health benefits.  (Main picture: Jenny O’Halloran of Blath na Mara with her family).

Here Ruth Doris introduces three entrepreneurs who have built a business around seaweed.

Preserving the integrity of wild seaweed is paramount to Rosaria Piseri, whose business, AlgAran was the first Irish seaweed company to attain organic status. Rosaria, who is on the committee for new standards for seaweed in Europe (IFOAMS), believes that the marine environment should be respected and doesn’t support the bulk harvesting of seaweed with a tractor or by other mechanical means.

Rosaria moved to Ireland 18 years ago from her native Italy. She had a keen interest in and extensively researched the world of seaweed and discovered that our Atlantic coastline had some of the cleanest waters in the world. In 2004, AlgAran was set up and is based in Malinmore, County Donegal.

From the outset, Rosaria saw her business not as a dream, but as a project – a challenge which she totally embraced: “You have to be very determined. I was a woman, I wasn’t that young and I didn’t have much money”. A lot has happened since those early days. AlgAran now produces a range of items which are organically hand harvested with maximum respect and care for the environs. Products include organic seaveg including Carragheen Moss, Irish Dulse, Dillisk Power and Kelp together with Irish Sea spaghetti, seaweed dressing and seaweed salad. The company also creates a range of seaweed cosmetics from shampoo, massage oil, and hand cream to lip balms and foot oil.

When it comes to health benefits, Rosaria believes seaweed has much unrealised potential. “There are so much important ingredients that we don’t find in any other food on the earth. I think there is still much to discover.”

Another returnee to Irish shores, Jenny O’Halloran of Blath na Mara came back to Inishmore – the largest of the Aran islands – from New Zealand with her family to take over the seaweed business her father had set up over a decade before.

Seaweed has been part of the tradition of coastal communities for centuries and Jenny explains how kelp harvesting for iodine production was a huge income for island communities in the 1800s and 1900s.

The mission statement of Blath na Mara is to revive an age-old tradition to nourish the new food generation. Seaweed fits into Jenny’s busy lifestyle, and she often munches on raw dillisk to keep her energy levels up when she’s on the go.

Dillisk is a good substitute for salt and can be used as a seasoning in stews or as a rub on roast chicken. Carrageen Moss is useful as a thickening agent and in desserts, while sea spaghetti is delicious dried and marinated.

Sustainability is very important to Jenny whose husband David is a marine biologist. They harvest the seaweed by hand, cutting some species with scissors on shore and snorkelling for others. They also monitor regrowth through use of photography and other appropriate recording methods.

While the organic industry is well established, Jenny believes that there is huge interest in sustainability and traceability: “I think people are a lot more food and environmentally conscious. They want to know what they’re eating and they want to know where it comes from”.

Medical doctor, Prannie Rhatigan, grew up near the coast in County Sligo, where her interest in seaweed came from her father who taught her how to harvest seaweed from an early age. She has a lifelong interest in the connections between food and health and this passion can be enjoyed through her work on edible seaweeds and how to sustainably harvest them. A ‘Guide to Edible Seaweeds’ is available from her website Irishseaweedkitchen.ie and is a pocket size, splash proof booklet which features various types of seaweed. Each seaweed has its own QR Code which links directly to a video of Prannie giving a detailed description of the seaweed and how to harvest it sustainably.

Prannie has also published the book ‘Irish Seaweed Kitchen’ which gives recipes suitable for everyday cooking with seaweeds. You will soon discover that seaweeds are as varied as vegetables like peas, tomatoes, kohlrabi and cabbage and flavours range from nutty to spicy and truffle-like tastes. Our seaweed expert compares available varieties to “little sea herbs or vegetables. They have that synergy with the rest of the food that’s on your plate.” She recommends a variety of seaweeds, “a lovely combination of reds, greens and browns” to get the most from their dietary benefits and suggests adding seaweeds like alaria or bladderwrack to soups, which is “a great way of combining sea vegetables with land vegetables and herbs and spices.” One of her favourite recipes is a smoothie made with beetroot, a mix of seaweed with raw cacao and ginger.

Prannie works in the public health sector, while devoting her spare time to her passion for seaweed. She readily admits that she’s on the beach every opportunity she gets and also manages to fit in some organised seaweed walks. As a doctor, she has a particular interest in the healing potential of seaweed and research into its anti-inflammatory and other health benefits are ongoing.

We have all experienced that moment when...

Expectations on women to shoulder the...