A Driving Force at LinkedIn 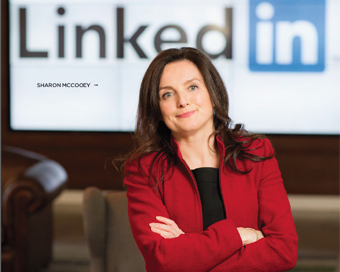 Sharon McCooey’s position is an enviable one – she heads up a thriving business which has not only expanded hugely from a workforce of just 3 to 1200 employees in 7 years, but enjoys the kind of consistently high employee satisfaction and retention rates which would turn the face of many a HR director green.

“I love the job because it’s about relationships and people – LinkedIn is my dream because it is a combination of networking with people and technology,” explains McCooey, a qualified accountant who now heads up LinkedIn’s dynamic, highly motivated and young workforce – the average age of LinkedIn employees in Dublin is around 31.

Since 2010, the Monaghan native, who previously worked in the US multinational sector for many years, has, however, also overseen the launch of LinkedIn branches in no fewer than 10 countries around the world – Brazil, France, Germany, Italy, Spain and Sweden to name but a few.

McCooey is the acknowledged driving force, which has established LinkedIn as one of the major tech players in Dublin’s crowded tech scene. As one of LinkedIn’s first hires she has personally overseen this period of immense growth and change, helping the company grow from a tiny staff seven years ago to a formidable workforce of 1,200-and-growing which works across all product lines, supporting more than 50 markets, from the UK as far as Turkey and South Africa.

The phenomenal success of the company she believes, is down to a handful of factors – firstly, says McCooey, it’s really all about hiring the right kind of people. “There’s a snowball effect from getting great people, who then attract more great people and they all do great things,” she observes.

The other big reason for LinkedIn’s success, she believes, is the fact that the company is a purpose-driven organisation. “Our vision is connecting professionals around the world to make them more productive and successful, so when we talk about our successes, we talk about how many people either find jobs on LinkedIn, funding through LinkedIn for their business, or, indeed, new business through LinkedIn. “We get told these stories by people who have benefited from LinkedIn.”

Put simply, LinkedIn connects the world’s professionals to make them more productive and successful and transforms the ways companies hire, market and sell. The company’s vision is to create economic opportunity for every member of the global workforce through the ongoing development of the world’s first Economic Graph. It has more than 467 million members, boasts offices worldwide, and reports McCooey, globe-trotting LinkedIn employees regularly get told first-hand about just how their day-to-day work impacts positively on the lives of others. People don’t just message LinkedIn with their appreciative comments, they’re also willing to do it face-to-face, she says.

“When any of the workforce walks through an airport with, for example, a LinkedIn logo on a bag, or on a t-shirt carrying the logo, people literally come up and tell us how LinkedIn has changed their lives. This happens all the time and that’s a great motivator,” McCooey declares.

An Evolving Career for Carmel

At the Cutting Edge of Cyber...

Until recently the idea of hackers taking...