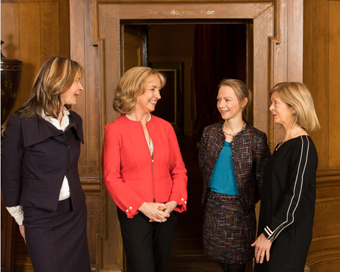 By any measure, the pharmaceutical industry in Ireland has been one of the country’s major success stories. From a virtual standing start 20 years ago, some 120 overseas companies have established operations in Ireland and 9 of the biggest 10 pharma global companies have a presence in the country.

Pharmaceuticals accounts now for more than 50% of Irish exports, employs almost 25,000 people directly with the same number employed in supplying products and services to the pharma companies operating in Ireland.

There are many Irish women in the pharma industry, some at senior and executive management levels, but there is room to grow that number. And that is why the Irish affiliate of the US-headquartered International Society for Pharmaceutical Engineering has recently launched its Women in Pharma (WIP) initiative, aimed at boosting the presence of women in a rapidly-expanding industry.

At the Ireland affiliate launch of the initiative in Carton House, a number of women pharma executives heard from two women who have made it to the top in their chosen field – Geraldine Murphy, Vice President Europe North, Australia and New Zealand, Leo Pharma and Clare Sullivan, a Chartered Engineer who played a major role in the development of the new €80 million Royal College of Surgeons of Ireland, National Surgical and Clinical Skills Centre in Dublin. The inaugural event was sponsored by two of the Ireland’s largest engineering consultants, DPS Group and PM Group.

Geraldine Murphy who has a MSc. in Biochemistry from UCC outlined how she had risen to her senior role with Leo Pharma and how it was a management course in University of Ulster that led her into the commercial side of the pharma industry. “It was like a light bulb went on, I knew this was what I wanted to do,” she said.

At Leo she was the only woman on the company’s management committee when she was appointed Managing Director of Leo Ireland.   “This was a big shock in a male-dominated organisation and bringing about necessary change in a very unionised environment was a major challenge.” However she went on to say she received a lot of support from many of her male colleagues.

When a decision was taken to merge Leo’s Irish and UK operations, there were further challenges. “At the time of the merger of the Irish and UK operations we had to bring about significant structural changes to both organisations – this required a lot of listening in order to build trust and to allay fears that we were ‘flying in from Dublin to tell the UK team how to run their business’. Now we work really well, but it did take a lot of work to build the required trust.”

Murphy’s responsibilities with Leo extend beyond Ireland and the UK to include the four Nordic countries, Australia and New Zealand. The lessons she has learnt – “the importance of having a mentor, surrounding yourself with the best people, listening and having the courage to believe in yourself”

Clare Sullivan described her road to becoming an Engineers Ireland gold-medal Chartered Engineer. Why a CEng? “I wanted something that recognised my skills in simulation techniques and medical training.”   She added: “Obtaining my CEng allowed me to become involved in the RCSI National Surgical and Clinical Skills Centre project – where the York Street development allows medical training using mannequins as part of a high technology teaching process.

“I wanted my engineering skills to be validated and this happened during the CEng process where I had to defend my application to a panel of other engineers,” Sullivan said. “It gave me a voice and gave me the opportunity to become involved in landmark development like the RCSI project.”   She added ”We’ve come a long way since Alice Perry became the first woman to obtain an engineering degree back in 1906 and women now account for 20% of engineering students and 10% of Chartered Engineers”.

The clear message from the launch of Women in Pharma, however, is, there is major scope for women to play a much greater role in the burgeoning Irish pharmaceutical industry.

Sue Cooke, Director, Strategic Consulting Group with DPS Group, the Irish headquartered engineering and project management entity with operations worldwide employing more than 1,300 people said: “We are role models and we need to take a chance on youth and young women. We need to identify talent early and become more involved with schools and colleges and tell them what engineers working in the pharma industry do – the opportunities that are there.

Cooke was invited onto the ISPE International WIP committee this year, along with the other event organisers, Susan Neenan, Alexion Pharma, Liz Dooley, Johnson & Johnson and Eileen Lee, PM Group. “We want to grow the Women in Pharma initiative, we want to encourage women to become involved with ISPE and establish a mentoring programme. We also intend engaging with other Women in Business and technology groups.”

Matheson has the Smarts!

Matheson was delighted to host Ireland’s...

We have all experienced that moment when...