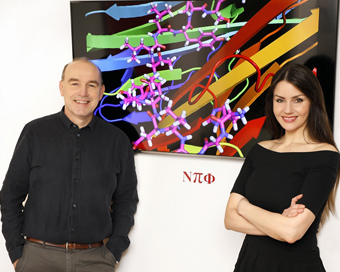 Nuritas, a biotechnology company that is revolutionising the discovery and use of bioactive peptides through artificial intelligence (AI) and genomics, has announced the close of a circa €16 million Series A funding round led by Chicago-based Cultivian Sandbox Ventures.

This brings the total invested to date to approx. €25 million, including early funding from U2’s Bono and The Edge, Salesforce CEO Marc Benioff, Singapore-based VisVires New Protein, angel investor Ali Partovi and Enterprise Ireland. The latest round of funding will support Nuritas’ global growth to address and solve many of the most pressing health issues of the day, including the diabetes epidemic.

“Nuritas’ unique platform delivers truly life-changing health benefits and we are very pleased to be involved in its growth – it’s a brilliant team and such an exciting technology,” said Nick Rosa, Managing Director of Cultivian Sandbox and Co-founder of Sandbox Industries. “We expect Nuritas to quickly emerge as one of the most innovative companies in the world, effecting real change.”

Since launching in 2014, Nuritas has grown rapidly with its AI-powered peptide discovery platform, with applications spanning health and wellness, pharmaceuticals, agriculture and dermatology amongst others, attracting high-profile investors and partners, including BASF SE.

“In an effort to expand our health solutions, we searched the globe trying to find such an innovative discovery technology and we eventually found it with Nuritas,” said Michael De Marco, Global Head, Research & Development Human Nutrition and Pharma Solutions, BASF SE. “The most immediate fruits of our collaboration will be the U.S. launch of an anti-inflammatory for sports nutrition in 2018. This is only the beginning, our collaboration is progressing and on track to yield more groundbreaking products in the future.”

Another area of strong and sustained focus for Nuritas is diabetes, which is a major societal issue. According to the International Diabetes Federation, an estimated 352 million individuals globally are living with pre-diabetes which is considered an early warning sign for diabetes. An estimated 34 million pre-diabetics globally move on to develop full blown diabetes each year. In the EU alone, 36 million people are estimated to have pre-diabetes.

“Bioactive peptides are known to play a role in managing diabetes and many other areas, but the current methods of identifying those that may work is time-consuming, inefficient and expensive,” said Emmet Brown, CEO of Nuritas. “Our artificial intelligence platform has already disrupted this antiquated process by targeting, predicting and unlocking peptides that can positively impact in conditions like pre-diabetes while reducing the cost and time needed to find them. We’re excited to have Cultivian Sandbox  and others join our mission to unlock these huge capabilities to improve human and animal health.”

Nuritas Founder and Chief Scientific Officer Dr Nora Khaldi stated, “This investment will not only help us accelerate our route to market, explore new disease areas and grow our already strong team, but it will also push us even further in extracting the great potential of what our technology is capable of creating. What is so exciting is that the inflammation ingredient launching in the U.S. next year is actually the first healthcare ingredient that has been fully discovered through the use of Artificial intelligence. “

Julie Sinnamon, CEO, Enterprise Ireland said, “Innovation is a key driver of competitive advantage for companies with global ambition, allowing them to build scale and grow their businesses in overseas markets. Nuritas is a fantastic example of an innovative company which has the vision and capability to design and develop products and services that will positively impact the lives of people worldwide.”

Nuritas uses a proprietary AI and genomics platform to rapidly analyse the billions of molecules and peptides in food to predict and identify how they impact specific health areas, molecular pathways or receptors. When compared to traditional discovery methods, the Nuritas platform has been shown to identify peptides ten times faster and 500 times more accurately while significantly reducing costs.

Minister for Business, Enterprise and...