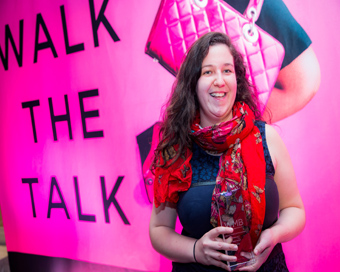 Social entrepreneur Keren Jackson has been on a decade-long journey of self-discovery. Having battled severe depression and homelessness, her experience of racial social exclusion led her to set up youth-driven social enterprise BlueFire at the age of 20. Recently she was named ‘Newstalk WMB Female Social Entrepreneur Award’ winner.

Keren says the outdoor community festival, which has been running since 2013, is akin to Electric Picnic, bringing together “cool arts and exciting experiences”.

The first festival, which Keren describes as a “garden tea party”, has evolved over the years into a major occasion with over 150 artists performing, with world music on the main stage, workshops and live street art.

What’s unique about BlueFire is that, in keeping with its youth focus, its 300 volunteers or “changemakers” are aged under 30. Directly impacting 15,000 young people to date, it also runs youth empowerment programmes and community integration workshops for teenagers.

Keren left school at 15, later joining Youthreach. Overcoming personal struggles, she says the programme for early school leavers gave her the space to process her experiences in “a teenage way.”

At age 18 she moved to Barcelona, living with her, then boyfriend, now fiancé, who is from Gambia. While she says there were issues being an interracial couple, what was more damaging was the experience of social exclusion which was “very extreme”. It was that experience of feeling that you don’t belong in your local community that drove her to want to do something in Ireland.

BlueFire is a “testament” to her fiancé, who she says “opened her eyes”. However, she is keen to point out that her experience was a subjective one. The Spanish community she was living in was experiencing abject poverty and social exclusion. She acknowledges that “There are lots of African immigrants living throughout Spain who are thriving. Similarly, in Ireland, the majority of migrants in Ireland are working and contributing to society”.

The term racism is a “very broad” one. There’s overt racism, and she says there are more subtle forms of racism, where you can’t argue, or you’re perceived as “oversensitive”. Karen says that while Ireland is a particularly welcoming country, research statistics found that 74% of working migrants don’t mix with Irish people outside of work.

Despite its success, founding BlueFire by herself is something in hindsight she wouldn’t necessarily recommend. Having no contacts and no real work experience apart from a seven-month internship in a garage and a stint as a cashier, she learned everything from scratch.

She acknowledges that without that sort of naïve “have a go” attitude, BlueFire would not have happened. “We don’t realise how important that kind of ‘I can change the world, I can do anything’ is.”

By bringing together intergenerational teams of young people “who see only the possibilities” in a room with those who have “30, 40, 50 years’ experience” unique solutions to real-world problems can be found, she believes.

Keren completely rejects the idea that her generation is apathetic. She continuously meets young people who “blow her mind”. Another unique aspect of BlueFire is its all-female management team which Keren explains was a “lucky accident”. Having been on a journey over the past 18 months of waking up to women’s rights and inequality in Ireland, she has recognised the power in female collaboration and female leadership. “Coming together for a common goal, a shared cause – there’s just something very beautiful and very powerful in that.”

As founder and CEO of BlueFire, she has many accolades to her name, including an invitation to speak at One Young World in Bangkok in 2015 and recently becoming a fellow of VVLead; a partnership between Vital Voices and Pond’s.

Winning the Newstalk WMB Female Social Entrepreneur Award 2017, was an ‘oh wow’ moment, she says. It gave her the “affirmation to believe that ‘yeah, we can do this’.” The win was an important validation of the work her team have been doing for five years she says: “I’m the one who gets to go to these nice events. So for the team to be recognised for this really prestigious award shows them the impact that they’re making and that what they’re doing is really important.”

It was one of those never-to-be-forgotten...

How Ciara Donlon got Hooked...

Ciara Donlon always knew she wanted to be...