How Ciara Donlon got Hooked on the Bra Business 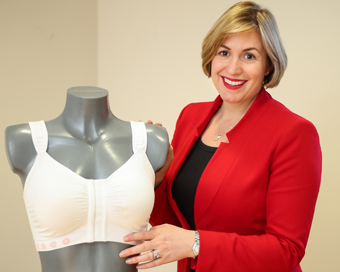 Ciara Donlon always knew she wanted to be her own boss. A chance encounter in a shoe shop in her local area of Ranelagh set her on the path to establishing her award-winning company, THEYA Healthcare.

As head of online with Vodafone, Donlon was ascending rapidly in the corporate world but a chat with a solicitor turned shoeshop owner in Ranelagh opened her eyes to the option of retail. As they discussed the flourishing businesses in the village, the shoe shop owner pointed out an empty premises and said the one thing Ranelagh was missing was a good lingerie shop.

With a background in management and marketing in the corporate world, Donlon knew next to nothing about fashion and retail, but she did remember the women on her team in Vodafone having difficulty getting good maternity and nursing bras.

She and her best friend ­– now the marketing director at THEYA – surveyed women on the street in Ranelagh, 85% of whom identified a need for a lingerie shop. She took redundancy from Vodafone in 2009, AIB provided 50% of the startup funding and Cupcakes lingerie was born.

“Cupcakes opened next door to AIB in Ranelagh at Christmas 2010, it was minus 15 degrees and snowing outside, there was no traffic in the village because of the weather… but we were profitable in year one. It was enormously successful. I didn’t know the industry but I learned how to fit and got a reputation for fitting.

“We supplied maternity and nursing bras but I noticed we had an increasing number of post breast cancer customers coming in looking for comfortable bras – even for sleeping in at night – that were both pretty and functional.”

The offerings on the market at the time, she says, were either purely functional and downright ugly, or very lacy and sexy, not suitable for everyday wear. She found a designer, they produced five different iterations of samples, and they have traded as THEYA Healthcare since February 2015.

Ireland is a useful test market, says Donlon – who lives in France with her husband Laurent and their son Senan ­­– and she knew many of the relevant people because the lingerie business is small and the area of post-operative underwear so specialist. Nurses and specialist shops jumped at the chance to stock a better product, and both Arnotts and hospitals came to her, rather than the other way around.

It’s been a harder sell in the UK, where she knew the NHS supplier list was the only place to be.

“I knew we needed to have serious USPs for that,” she explains.

THEYA’s bras are unique because they are made from bamboo, which is renowned for its antibacterial properties as well as being comfortable on the skin.

“We did a clinical study in UCD and Claire Kelly, who’s an oncology nurse, did her research MSc into it. I knew we needed scientific proof in this market, so we have proof that our bras are highly antibacterial. We looked at the bacteria commonly found in breast wounds and our bras are 93% and 97% resistant to that.” The patent is pending.

They’re nicely designed and have antibacterial properties, but the bras are also noted for their comfort. As part of the process of the Ernst & Young Entrepreneur of the Year, Donlon contributed to the competition’s TV show, in which she was amused to hear a customer describe the bra as “like an armchair for your boobs”.

“We get amazing feedback. It’s really important to us to make women feel better when they’ve gone through this major trauma,” she says.

As well as the EY process, she has been named Cartier Laureate for Europe at the 2017 Cartier Women’s Initiative Awards.

While the company is also working on the French market, Donlon has turned her sights on the US.

(This article was originally published in our recent annual WMB Printed magazine).

Social entrepreneur Keren Jackson has been...

Beauty is a notoriously difficult industry...