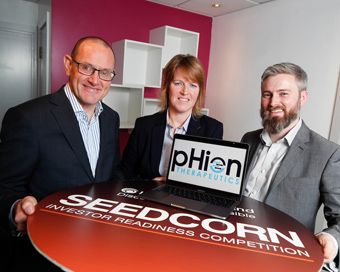 Phion Therapeutics was crowned Overall Winner of the 2017 InterTradeIreland Seedcorn Investor Readiness Competition, winning a cash prize of €100,000.  The winners were announced at the grand final of the competition at Crowne Plaza, Northwood, Dublin earlier this week. The other main winner on the night was Cerebreon Technologies, which was named Best New Start Company, winning a cash prize of €50,000.

Now in its 15th year, Seedcorn is the island’s biggest business competition for new start and early stage companies in any sector, from any part of the island.  With over 275 competition entries, the winners went up against companies in a range of sectors including Medical Devices, Technology, FinTech, Design Engineering, Diagnostics and even Digital Ticket Sales.  This year’s competition saw an unprecedented number of submissions from female entrepreneurs, with five women among the regional winners who went forward to the national final.

Belfast company, Phion Therapeutics was founded by Professor Helen McCarthy, Ph.D and sells services (contract research) and licenses (right to use their technology for pharmaceutical development and therapeutic applications).  The company intends to launch a third, more tangible, product that is defined as a research use toolkit that allows access to its technology in a less expensive and smaller kit that allows each end user the ability to test the technology. 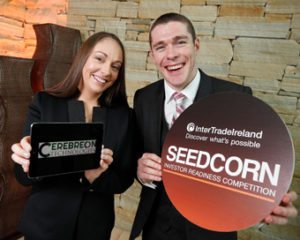 Donegal company, Cerebreon Technologies was co-founded by Gillian Doyle, CEO and Kenneth Doherty, COO. It develops fintech software targeted at the UK insolvency industry.  It brings an advanced level of machine intelligence and automation to the processes involved in insolvency. Its software also improves compliance with financial regulators and will reduce the amount and duration of the debtor’s arrangement.

Commenting on the announcement of the winners, Ken Nelson, Chairman, InterTradeIreland said: “It’s very rewarding to be in a position to promote the growth of new start companies on the island of Ireland, north and south.  Entrepreneurs and innovators are essential to the health of every economy and InterTradeIreland is proud to support them as they turn ideas into action.  It’s great to see so many female entrepreneurs involved in the competition this year. I warmly congratulate both of our winners on their success in our very challenging Seedcorn competition. I wish them and indeed all those companies who entered this year all the best for the future.”  The Seedcorn competition is aimed at new start and early stage companies, which have a new equity funding requirement.  It has an overall cash prize fund of €280,000, with no equity stake.  Since it started in 2003, the 2775 companies that have gone through the competition have raised over €229m.

A new study of workplace equality has...

The Role of Workplace Culture...

Research from Robert Walters has found that...