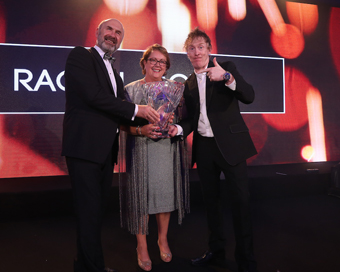 The glittering black tie event was attended by some 600 of Irish retail’s biggest names who gathered to mark the significant achievements of the finalists and winners.

Rachel Doyle, a graduate of horticulture, is the proprietor of Arboretum Garden Centres in Carlow and Wicklow, a Board Member of An Bord Bia and a former President of the International Garden Centre Association (IGCA).

She started her business in Leighlinbridge, Co Carlow selling plants from the garage at the side of her house and has grown it into a multi-million euro business providing almost a hundred jobs in rural Ireland. Working alongside her husband Frank and sons Fergal and Barry the business which started in the late 1970’s is very much a family affair. The success of the Carlow business led Rachel to acquire another Garden Centre in Wicklow.

“She is a woman who has achieved hugely both in her business and family life and has managed to hold some of the highest positions in the Garden sector both within Ireland and internationally. Despite all of this, she remains one of the most encouraging and affable individuals I have ever met so it is fair to say she has her feet firmly planted on the ground”.

“Rachel’s family and the staff of Arboretum should be rightly proud of tonight’s achievement. Despite being around the retail industry for some time I continue to be inspired by the brilliant commitment and innovation of Rachel in all that she does.”

“I want to commend her for instilling the highest standards of service and engagement in her businesses and for continuing to be a great colleague, advisor and advocate for the industry” said David Fitzsimons, CEO, Retail Excellence.

eHealth is the Remedy!

An independent survey commissioned by...