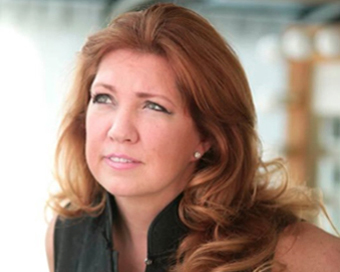 Oprah Winfrey for president? It sounds bizarre, but only until you realise who has made the prediction – Pippa Malmgren, former presidential advisor to George Bush and Ronald Regan, currently advisor to the British government on trade policy, is the woman who accurately foretold the global recession, the election of Donald Trump and the slowing of the Chinese economy.

In other words, yes, yes and yes.  Maybe it’s not completely beyond the bounds of possibility that we’ll see Oprah in the Oval Office one of these days.  It’s now acknowledged that Malmgren was way ahead of the pack when she advised her corporate audiences – whom she regularly lectures on global economics – to sell their shares by May 2007 in advance of the global economic meltdown. How’s that for hitting the bullseye!  The co-founder of the London-based H Robotics company (manufacturers of commercial drones) Malmgren works with investment committees and audiences around the world, mostly top echelon corporate executives and typically, she says, about 90% male.  And that’s the case wherever she goes – whether it’s Asia, Europe, Middle East or North America, and just about any area of business ­– financial services, insurance, defence, even the fashion industry. Everywhere, says Malmgren, she mostly finds herself talking to men about what’s happening in the global economic landscape.   Why is that?

“I think human beings like to hire people who are like them,” she says, which essentially means men hiring men.  There’s also the fact that women tend to be more focused on doing a good job – and so less focused on self-promotion than men, says Malmgren, who is addressing the Kilkenomics festival in Kilkenny which runs from this Thursday until Sunday next, November 12th.

And then, of course, there’s the confidence factor:  “The most important thing is that we confuse confidence with competence! All the surveys show if a man is 40% ready to do a job, he’ll offer to do it but women have to feel 100% capable before they will allow their name to be put forward.  “What’s also interesting is that women have a tendency to review and double check their work. “We view this as a sign that they lack confidence so you end up with this crazy situation that the ever-confident male appears competent but the under-confident female appears psychopathic because she’s double-checking her work! The outcome is insane,” says Malmgren, who will join a prestigious line-up at the Kilenomics Festival  featuring some of the world’s leading economists, financial analysts, strategists and media commentators.

From Malmgren’s perspective, she says, the Irish business sector is not any different to the business world of the UK or North America.  But there is an answer to the gender balance which dogs the world of business, she observes, and it lies in a Silicon Valley company called Blendoor:  “Companies can use algorithms to blind themselves to a candidate’s gender or cultural background and thus hire on merit,” says Malmgren, who predicted the triumph of Trump – or at least, forecast that populism would win.  “Populism is persisting across Europe and the US, and Trump is a symptom of it.  “It’s very easy to become emotional about Trump,” she says, adding however, that if you dig a little deeper, what he really represents is a transfer of power from Washington back to the American states:  “That’s where the power base comes from and there are many people who don’t like how he sounds, but they like this.”  And here’s where Oprah comes in:  “The US public is disenchanted by professional politicians. People wanted radical change so they elected Obama.  “They felt he didn’t change things enough and they wanted more radical change so they elected Trump. I believe that the next time they will opt for even more radical change.  “That’s why the most popular names for the democratic nomination for the next president are Amazon founder Jeff Bezos, Mark Zuckerberg of Facebook and Oprah Winfrey. I think Oprah could win the day. I think she governs; she could run America.”

Malmgren has a subtle word of warning for the Irish government too:  “The Irish believe their tax position is privileged and no longer negotiable but I suspect the EU has a very different view. “The EU is pushing for more harmonisation amongst EU members post-Brexit.  “The whole purpose of the Apple tax case is to challenge Ireland’s tax position.  I suspect this story is not over,” she observes.

Over the weekend, Malmgren will be engaging in a number of activities at Kilkenomics – and making some forecasts:  “ I’ll be talking about big changes that will see Mexico become the new China as the most competitive energy market, Lagos in Nigeria become the new coding centre for the world economy and the fact that new arms race between the superpowers will be in quantum computing. ” Now, who wouldn’t sit up and listen to that?

Natalie Walsh has come a long way in ten...

Sisters Kate and Annie Madden are the brains...