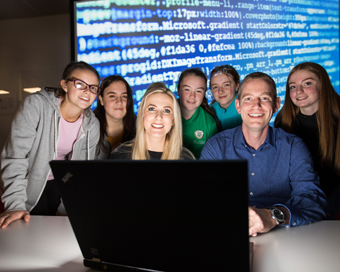 Vodafone Ireland recently announced #CodeLikeaGirl, a new initiative which aims to teach teenage girls how to code. Run in partnership with CodeFirst: Girls and supported by Technology and the Women’s Network, the coding student workshops take place over the course of a week and are delivered by Vodafone employees. The initiative will provide female students with basic knowledge of computer languages and development programmes, with the aim of building a website upon completion.

The first workshop took place on 6th-10th November with 20 girls from Cabinteely Community School ranging in age from 14 to 16. Further workshops with schools across Ireland are planned for early 2018.

#CodeLikeaGirl forms part of global Vodafone partnership with CodeFirst: Girls to provide teenage girls across 26 countries with coding training. It is the largest international, in-person global coding programme and aims to encourage more young girls to consider a career in STEM in the future by teaching them to build something tangible they can be proud of.

It is estimated that there are more than 120,000 people in Ireland working directly in roles requiring STEM experience but just 1 in 4 of those working in this area are women. In 2015 only 5.3% of Leaving Certificate engineering students were girls and boys outnumbered girls 3:1 in technology subjects.

Earlier this year, the United Nations Educations, Scientific and Cultural Organisation (UNESCO) expressed concerns that ‘female participation is falling in a field that is expanding globally’. Men still dominate the number of STEM graduates in most countries. In 2014, around 22% of UK graduates in science, mathematics and computing were women. The gap was wider in Germany (19.3%), France (21.5%) and Switzerland (14.7%). In the United States, women make up around a quarter of those in STEM occupations. STEM fields also have fewer women on boards than any other sectors.

Coding is becoming one of the most in-demand skills across industries as an increasing number of businesses now rely on computer code. Half of all programming openings are in industries outside of technology, such as finance, healthcare and manufacturing, while recent research found that coding has become a core skill that bolsters a candidate’s chances of commanding a high salary.

James Magill, Human Resources Director at Vodafone said: “In recent years, there has been significant progress in closing the global gender gap in various aspects of society. However, in many countries, the gap is widening in STEM careers. #CodeLikeaGirl aims to help close that gap here in Ireland and show young girls that a future in STEM is an exciting prospect. We know that coding is going to play an even bigger role in careers in the future so it’s important that we empower young women to learn this skill while at school.”

Our first workshop has proven to be a huge success and we look forward to rolling this programme out to more secondary school girls across the country in the coming months.”

Empowering women and helping young people increase their skillset through technology are two important areas of focus for Vodafone as part of the company’s 10-year sustainable business goals. By 2025, Vodafone’s ambition is to be the best employer for women. The company is also seeking to connect 50 million women living in emerging markets to help improve their lives and livelihoods.

Founded by former Google director and...