Finn’s World 'Do what you love. Love what you eat'. 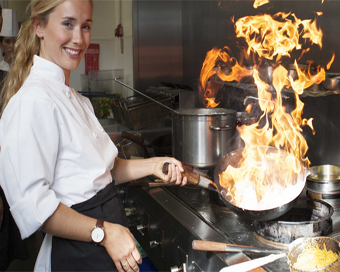 It was one of those never-to-be-forgotten lightbulb moments.

Tuning in to a TED talk by Hawaiian-based diver and chef Kimi Werner brought marine scientist and cookery fan Finn Ní Fhaoláin to a startling realisation that changed the way she lived her life: “It was a case of ‘OMG, I can do both!,” recalls Finn, who graduated from UCC with a BSC in Earth and Ocean Science and MSc in Marine Biology in 2014.

That TED talk, about how to follow your passion is one of the main reasons why these days the 27-year-old continues to work as a freelance marine scientist but has also her long-standing interest in gluten-free cookery, publishing a best-selling cookery book earlier this year.

After being diagnosed with Coeliac Disease at 19, Finn spent much of her free time transforming traditional recipes into gluten-free versions for her own enjoyment, but never really considered taking it any further. However, things were slow in the Irish Marine Science sector when Finn and her classmates graduated three years ago. Many of her peers emigrated to jobs abroad, but the young Donegal woman who is also a passionate surfer found herself reluctant to jump ship for other climes.

In the meantime, she explains: “I’m a fan of TED talks. I was listening to a lot of talks about how to follow your passion and create your own job.  I heard a TED talk by a woman called Kimi Werner who was both a diver and a chef. She has a great TV programme about her lifestyle called Living Free with Kimi Werner.  I realised, hey, you could do both!”

When her month at sea was up, Finn traded skills with a pal in the tech sector who was in training for the Galway Bay Swim – he set up Finn’s healthy eating blog www.finsfitfood.com in return for a fistful of healthy recipes. The blog quickly attracted an enthusiastic following so much so, that by the summer of 2015, less than a year after she had graduated from UCC, the young scientist found herself thinking about writing a cookbook: “I decided that a good gluten-free cookbook was needed,” she recalls. She certainly wasn’t short of good recipes:

“Since I was diagnosed, I’d been experimenting with turning traditional recipes into gluten-free versions. This went on all through college, so by that stage I had quite a collection of recipes.”

Faced with unfamiliar territory, she did what any modern twenty-something would do: “I googled how to write a cookbook proposal!” By early autumn of 2015 Finn had found herself an agent and put together a rough version of the book.  She worked on the book throughout 2016, earning money by catering for events such as weekend yoga retreats and working as a roving baker and caterer. She also worked with her father, Colum Stapleton, whose Eco Lodge, Gyreum, in Sligo, was being filmed for an episode of the popular BBC Programme Hotel Inspector. And, as if all of that wasn’t enough, Finn signed up for a culinary arts course at St Angela’s College in Sligo: “I felt that it was important to have a formal cookery qualification if I was bringing out a book,” she explains, adding that once it began to do the rounds of the publishing houses, the cookbook was met with a very good response.

In the end Finn’s World was published by Gill in April 2017, and to widespread acclaim: “It became the Number One cookbook in Ireland in its first month,” recalls Finn whose life is now a busy round of blogging, cookery demos, classes and speaking engagements around the theme of how healthy cooking can be affordable and easy.

She’s also created a recipe for the Camile Thai restaurant franchise – a gluten-free teriyaki prawn stir fry  – but has continued with her scientific life at sea when the opportunity arises. “I basically have a foot in two industries! I’m working in the marine science area on a freelance basis while at the same time keeping busy as a gluten-free specialist doing demos and giving talks.”

Meanwhile Finn’s competing in Ireland’s Best Young Entrepreneur Award, a national competition run by the Local Enterprise Offices – regional finals will be announced early next year with the Nationals being hosted in March. She has been nominated for the prestigious ‘Forbes Magazine 30 under-30 in Europe’ competition and as she awaits the results with interest she emphasises: “For me what’s important is not how many times you’re knocked down –but how many times you get back up again!”

Sisters Kate and Annie Madden are the brains...

Social entrepreneur Keren Jackson has been...