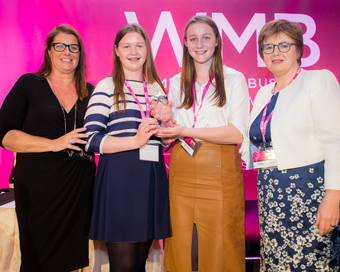 Sisters Kate and Annie Madden are the brains behind FenuHealth, the equine supplement business they set up while still at school. Their youth has not held them back, and among the many accolades to their name, the sisters were the recent recipients of the Sodexo WMB Female Newcomer Award 2017 hosted last month in Dublin.

As well as the recognition of their achievements, winning awards is good for business Kate says. “Afterwards we get a lot of media coverage and customers get confidence that the business is run well.” Annie says that to be able to say that you’re a finalist is great. “WMB is well known and well established. We feel it’s a really good opportunity. When you win, it’s even better.”

As well as the media coverage, posts on social media on the day of the WMB Awards attracted the attention of horse owners. The Maddens say their social media activity gained them, seven brand new customers. And at a 92% re-order rate, they say that business is significant.

FenuHealth began with a project on gastric ulcers in horses that the sisters presented at the BT Young Scientist Exhibition in 2015. Annie was just 13, and Kate was age 14 at the time. Irish businessman Michael Connolly of Red Mills was so impressed by the project that he invited them as to attend Equitana, the world’s largest equestrian trade fair in Germany. The schoolgirls made some valuable contacts there which led to the set up of FenuHealth. Having grown up with horses, going to the races and competitions, their background helped them find the gap in the market, Kate says.

The company’s two main products are designed to tackle gastric ulcers, a very common problem which affects 90% of racehorses. FenuSave and FenuCare come in a powder to sprinkle on the horse’s feed. A unique selling point is that the product is 100% natural and unlike other products on the market can be given to a horse on the day of a competition.

Being at the helm of a global business is something the schoolgirls take in their stride. Rather than holding them back, they say their youth can be an advantage. Annie says: “People often say to us that we are doing well in business despite being young girls. We think it is not despite but BECAUSE we are young and BECAUSE we are girls!’ “It’s because we’re young that we’re doing well. We try to take the angle that we’re different; we’re not just like every other sales person that comes along to them.” This positive attitude serves them well, and it’s something they attribute to the support they have received along their entrepreneurial journey thus far, which they say gives them the motivation to keep going.

A significant mentor and role model has been Mari Cahalane, the “mom figure” behind the BTYS (BT Young Scientist). “She was behind us from the start. We’d ask ‘could we enter this?’ And she’d say ‘definitely, what’s there to lose.’” Other supporters have been Simon Coveney, who attended FenuHealth’s first launch as then Minister for Agriculture. Sabina Higgins, wife of President Michael D Higgins has also been supportive of FenuHealth’s founders.

The Maddens have certainly made some friends in high places, which they acknowledge does help to boost the company’s profile. Earlier this year, they were among a group of young innovators invited by President Michael D Higgins to Áras An Uachtaráin to meet the Prince of Wales and the Duchess of Cornwall. The Royal couple spent some time talking with Annie and Kate. “The Duchess is really into her horses. They wanted to hear more about the products.”Shortly after the meeting, the sisters were delighted to receive an invitation to meet the couple again at a function at the British ambassador’s residence. They quickly recognised the branding opportunity, making short videos talking about their meetings with the Royal couple and posting them on social media. “After the visit, our social media went crazy; everyone was liking us, following us, we reckon we got 40,000 extra followers between Facebook and Twitter,” Kate says.

Before they started their company, the Maddens say they hadn’t even realised that there was a problem with gender equality. Awareness is important if the challenge is to overcome, they acknowledge. “There is a lot of talk about gender equality, even in secondary schools now. Everyone’s aware of it. They’re positive about the future. “By the time all of our age group are out there working we reckon it will be close enough if not completely equal,” Kate says. “It’s definitely going in the right direction.”

FenuHealth currently exports to 14 countries, and customers include champion National Hunt trainer Noel Meade and Joseph O’Brien, who trained Rekindling, winner of the 2017 Melbourne Cup. The next big goal is to gain a firm foothold in the French market, which they say is a bigger market for them than the US.

So what qualities do entrepreneurs need to be successful? Kate says belief in your product is key. “We’re convinced the product works. Our big aim is to get people to use it and then they’ll see the benefits of it.” Juggling schoolwork with running the business is second nature by now with the sisters using their phones to take orders and make payments on the commute into Loreto on the Green. Annie, who is currently in Transition Year is trying out different things, recently doing work experience at the Mater Hospital. Kate, who is studying for her Leaving Certificate, plans to work with animals. She’s considering studies in commerce or agricultural science and plans to continue running the business alongside her studies. Whatever they decide to do in the future, the Madden sisters are galloping away with FenuHealth!

Oprah Winfrey for president? It sounds...

It was one of those never-to-be-forgotten...