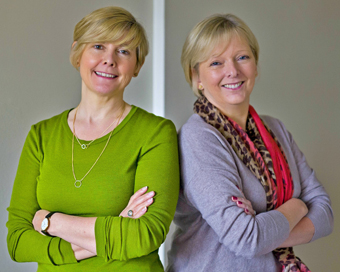 Philosophy and the history of art were clearly, chuckles tech-supremo Maeve Kneafsey, “the perfect subjects for a career in IT.”  Well they were for her anyway. Those halcyon days exploring philosophy at Trinity College, however, are a long, long time ago – these days the Clare native currently spends her time jetting between Dublin and America’s West Coast.

She hasn’t much to do with paintings nowadays either – the successful start-up she co-founded with business partner and management accountant Brenda Jordan, is currently powering ahead in the tech world.

Cloud KPI, which provides what she describes as “the necessary predictive analytics to underpin business growth,” recently made headlines by being accepted – and over hundreds of other start-ups, too – for a place on the renowned Women’s Startup Lab in California’s Silicon Valley. Exciting times for a woman who, way back in the 1990s, and in a completely different line of business, failed to convince her colleagues to bring that company online.

When the two women launched their new product in March of this year, they targeted business clients in the SaaS (Software as a Service) sector – “our primary audience is the US because 50% of SaaS companies are based there,” she explains.  Meanwhile, news that they had secured one of just nine sought-after places on the prestigious US accelerator programmed, came as a huge boost to the fledgling firm.

“You immediately plug into a whole Silicon Valley ecosystem,” explains Maeve Kneafsey, a previous shortlisted nominee for the WMB 2015 Woman in Technology Award. “It fast-tracks access to mentors, investors and customers! It’s super!”

The duo have just begun the year-long programme, which started on September 17th.

“We’ll be over and back to the US a good bit,” she ponders – but she says, it will be worth it. Having the place on the Women’s Startup Lab is a huge accelerator, if you’ll excuse the pun, but it really does accelerate everything!

“It’s like getting into a room full of the kind of people who’ve ever mentored or helped you in business. We essentially have access to a network of experts that might ordinarily take months or even years to build.

“This is basically speed-dating for business! They’ll have us working hard but that is what we need – you really couldn’t ask for more!”

The dynamic pair are no strangers to Silicon Valley – although they have offices in Ireland, their marketing and sales team has been based in the Californian tech-hub for some time now.

“Our primary audience is the US because 50% of SaaS companies are based in the US. We’ve just started to bring on our first US customer,” explains Kneafsey, who actually started out in life wanting to work in an art gallery, but ended up getting in the business world where she established a string of companies.

After graduating from Trinity College with a degree in the history of art, and spending some time working part-time in art galleries, her passion cooled. She realised that it was the business side of things that attracted her, rather than paintings and sculptures.

“My father was a businessman and I think that was in me,” she says. “He was an engineer by profession but ended up president of a large US multinational,” she recalls.

She worked in publishing for several years – initially in a company in London, which published a stable of tech titles, and it was this that really whetted her appetite for the tech-world.

“I learned a lot about tech and how exciting it could be,” she recalls, Back in Ireland she worked for the Sunday Tribune which was launching the Dublin Tribune.

“I headed up the commercial side of the Dublin Tribune,” she says, adding however that she eventually moved, seeking more publishing experience. There was a stint at Dublin publisher Attic Press, which was subsequently bought by the Cork University Press, and then some years with a firm which produced a wide variety of titles, including the Aer Lingus Cara and Discover Ireland magazines. By the late 1990s, she was CEO of another successful publishing company, and her interest in tech was growing.

“I could see that things were moving very rapidly and that big changes were on the way. I pushed for our publishing company to go online but was not successful.”

Eventually she left and co-founded her first company, AMAS, with Aileen O’Toole, formerly of the Sunday Business Post.

“I could see that the internet was the future and I wanted to be part of it,” she says.

AMAS was a digital strategy company, helping large organisations to use the internet in a way that would benefit their business, she says.

Two years later she sold her share in the business and set up Elucidate, a digital marketing and strategy company, which grew rapidly. She stayed there for some 13 years as founder and CEO.

It did well, successfully weathering the recession, but she says, her own vision had grown – she wanted to expand Elucidate’s reach internationally, but discovered that the skillset she needed was not in sufficient abundance. Undeterred, she wound up the company and launched her third start-up, MarketFinder, in 2013.

“This was a Software as a Service company. The company was to benchmark digital maturity for the financial services, but we were a bit ahead of our time,” she says.

However, as the saying goes, God helps those who help themselves, and in the meantime she had met her current business partner and co-founder of CloudKPI, Brenda Jordan and together the duo set their sights on California. The rest is history.

Really, what else can you say about Maeve Kneafsey, but watch this space?

We’re all born of pregnancy, yet the area...

The story of how The Irish Fairy Door...